Bale seals, which resemble small lead coins, are unassuming artifacts. You’ll have to look carefully to find them in Gallery 1 of the new Canadian History Hall, and even more carefully to make out the tiny images impressed on them. Despite their size, these seals tell the story of a consumer revolution that helped to build the Canada we know today.

The five seals in the Hall date from the 1600s and 1700s, and they came to North America on bales of cloth. Like the hallmarks found on vintage silver utensils, the seals provided confirmation — in this case, confirmation that a bale of cloth was of standard length, weave or colour, or that the manufacturer had paid his taxes. The practice of sealing cloth began in the Middle Ages, as European governments and guilds tried to enforce minimum quality standards for consumer goods. How these seals ended up in North American fur-trade forts speaks to Indigenous people’s rapid adoption of European textiles. 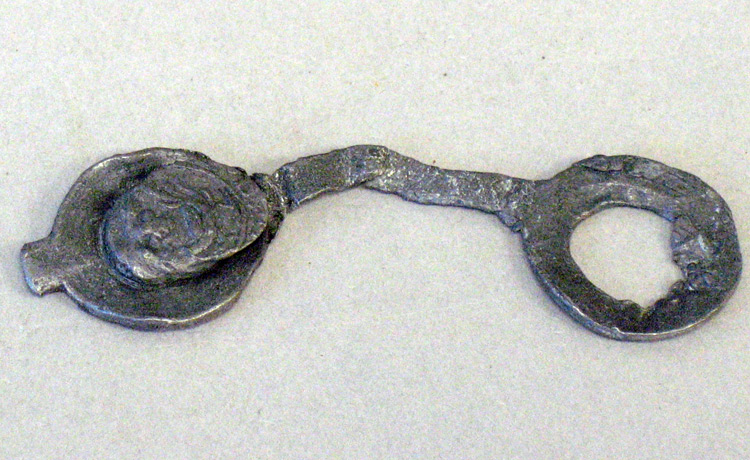 Many Canadians are familiar with the European origins of the fur trade: the popularity of fashionable felt hats spurred French and English fur traders to seek North American beavers, whose soft under-fur was particularly suitable for felt-making. However, Indigenous traders and consumers shaped the fur trade as much as their European counterparts did, insisting on high-quality goods in exchange for the beaver pelts they offered as payment.

Cloth was among the most coveted of trade goods. Cloth, clothing and sewing supplies accounted for over half the goods sold at some trading posts. Cloth decomposes easily and therefore rarely survives in archaeological sites; however, the discovery of lead bale seals — sometimes by the hundreds — confirms the tremendous volume of cloth that was imported into North America between the 1600s and the 1800s. For Indigenous participants, the “fur trade” was really a “cloth trade.”

Indigenous people valued cloth of various weights and colours for clothing, blankets and ceremonial regalia. As they did with other goods, Indigenous consumers carefully assessed the quality of the cloth offered to them. If it was defective, they demanded better stock. European traders scrambled to find suppliers to satisfy their Indigenous customers before their competitors could corner the market.

The images on the seals in the Canadian History Hall reflect the competition between English and French traders. The seals come from three archaeological sites hundreds of kilometres apart: the French posts at Fort Frontenac (present-day Kingston, Ontario) and Fort Michilimackinac (present-day Mackinaw City, Michigan), and the English post at Fort Albany, Ontario, on James Bay.

The three French seals depict fleurs-de-lys and roosters — typically French symbols. One of the two English seals depicts St. George, the patron saint of England, while the other bears a harp, perhaps the mark of an Irish product. Traders kept tabs on the goods offered by their competitors, and sometimes stocked cloth produced by their rivals in order to satisfy customer demand. Archaeologists occasionally find English seals on the sites of French forts.

French and English traders raced to obtain furs for European hat-makers, but they also competed to supply Indigenous consumers with cloth and other goods. The fur/cloth trade brought European conflict deep into the North American interior, and it brought Indigenous people into the global marketplace.

Tiny lead bale seals help us to tell this story.