One of the guiding principles of the new Canadian History Hall is to present this country’s history from multiple perspectives. The Hall’s opening stories, broadly chronological and thematic, deal with the archaeological history of the Indigenous peoples of Canada. Unfortunately, archaeological collections rarely reveal individual histories and, moreover, tend to be interpreted from a Western, scientific perspective. In contrast, we wanted to tell these stories from an Indigenous perspective, and we wanted to connect our visitors to an individual from the past in a way that felt personal and less distant.

First, let’s take a look at the story.

When this man’s skeletal remains were collected, nearly 60 years ago, Western researchers did not typically collaborate or consult with Indigenous communities. Now, his remains, and the objects with which he was interred, are being repatriated to Nunavut. As part of that process, Dr. Janet Young conducted a detailed analysis of his skeletal remains, discovering much about his life history and revealing important connections to the artifacts buried with him.

Nuvumiutaq was buried with his hunting equipment, including a bow-drill incised with scenes that may illustrate events from his personal life. Muscle and trauma marks on his skeleton corroborate the picture of a skilled kayaker and hunter who lived an eventful life. Photo: Canadian Museum of History

The man was in his early forties when he died, and was buried with a spectacular array of artifacts, most likely made of walrus ivory. One of these — a bow drill — was inscribed with dozens of pictographs, representing hunting scenes, animals, human conflict and village life. When these scenes were compared to the traumas and adaptive changes on his skeleton, we noticed many distinct connections.

First, the man had a condition known as “Kayaker’s clavicle,” which matched with the myriad scenes of kayaking on the bow drill. Furthermore, the man’s arm bones showed evidence that he had repeatedly lifted a heavy object in an unusual position, which accorded with scenes depicting a whaling captain holding a heavy harpoon. Finally, he had severely injured his legs and spine, and would have needed the aid of a walking stick. The bow drill depicts an individual moving among tents with a walking stick.

These connections suggested to us that the bow drill might depict the life story of the man with whom it was buried. In fact, one end of the bow drill shows a child playing among tents, while the other end shows an older individual with a walking stick. Did this bow drill feature an autobiography of the man who made it? 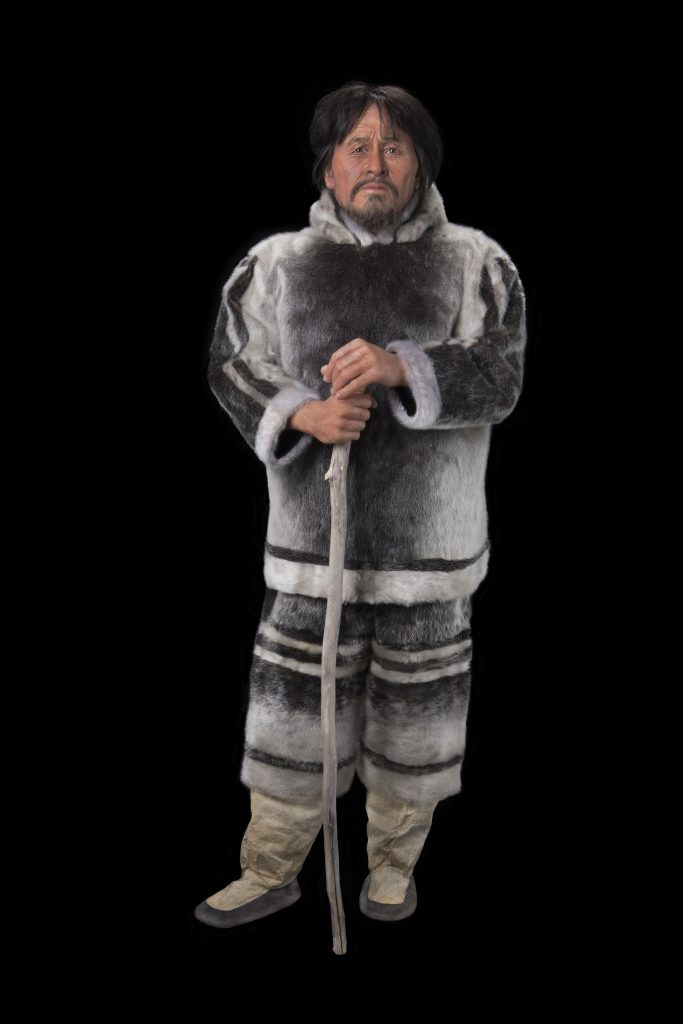 The finished reconstruction of Nuvumiutaq, an Inuit man who lived in the Canadian Arctic 800 years ago. Photo: Canadian Museum of History

It seems that this man chose to record his history in pictograms and now, eight centuries later, we wanted to share that compelling story. The question now was how to tell it in a way that prioritized an Indigenous perspective and revealed the individuality of this man.

Stay tuned to find out how we worked with the Government of Nunavut, the Inuit Heritage Trust, and the community of Arctic Bay to tell this fascinating story.