In our previous post, we introduced you to an Inuit man who lived eight centuries ago. During the process of repatriating his remains to Nunavut, we discovered evidence suggesting that he had revealed his life story in pictograms. We wanted to share that story with our visitors, but it was important to us that we did so from an Indigenous perspective.

First, we presented this story to the modern community of Arctic Bay, the closest community to his burial location. We asked them if they would allow us, with their collaboration, to tell his story in the new Canadian History Hall.

The reconstruction of Nuvumiutaq displayed in the Canadian History Hall. Photo: Canadian Museum of History

The response from the community was extremely positive, and we began working closely with them to develop an effective means of telling his story. Community Elders named him Nuvumiutaq, which means “person from the peninsula,” a reference to his burial location. We believed that reconstructing his face would prompt interest in who this man was, and the Inuit agreed. To respectfully reconstruct his face, the Inuit gave us detailed instructions on how they wanted his hair, skin, and expression to look, and they provided us with detailed historical photos for reference. For his expression, the Inuit indicated that they wanted him to “look proud, looking out on the land, remembering his past.”

With these instructions, we laser-scanned his skull and sent a plastic replica to Atelier Daynes in France, which was able to produce a forensically accurate reconstruction of his face, along with the expression requested by the community. The process was iterative, and feedback was necessary to get his hair, skin tone and expression just right.

Dr. Young provided details on his height, weight, and musculature to both the community and to the forensic artist. A community Elder, Olayuk Kigutikakjuk, offered to produce traditional sealskin clothing for the reconstruction. The final touch was to add a walking stick, which we made from a piece of aged wood. The result was a strikingly lifelike mannequin of a real Inuit man who lived 800 years ago. 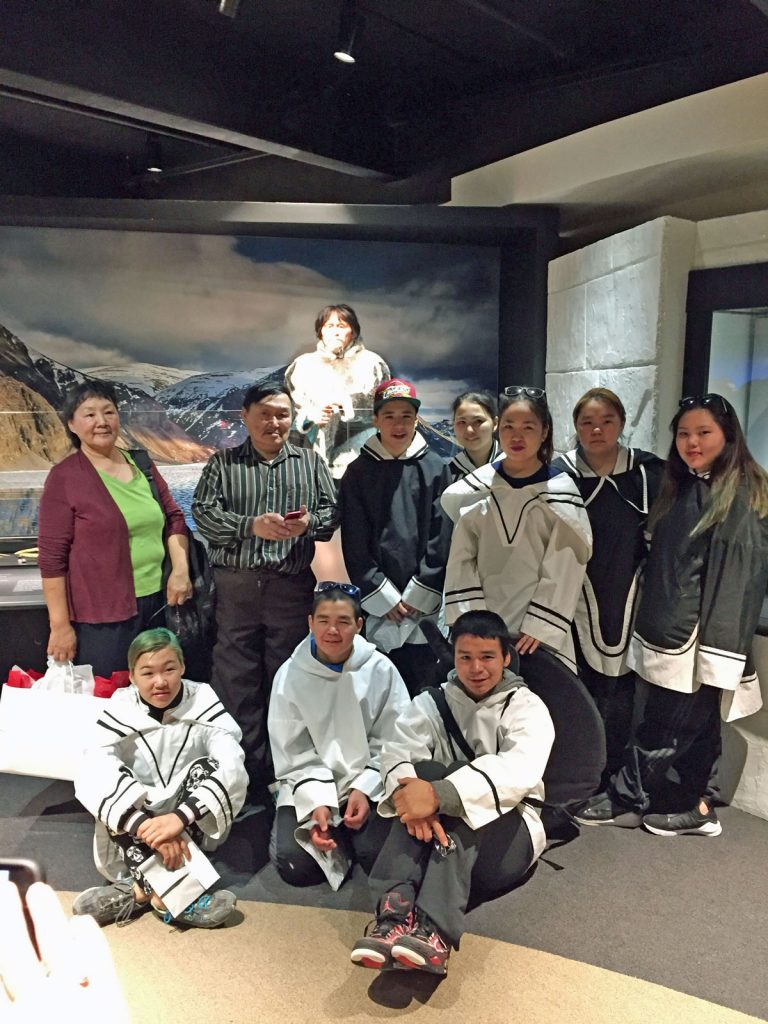 Members of the Arctic Bay community and the Inuit Heritage Trust attend a private unveiling ceremony in April 2017. Photo: Canadian Museum of History

The final display includes reproductions of Nuvumiutaq’s artifacts, a video about the collaboration with Arctic Bay and the reconstruction process, and an interactive that allows people to explore the pictographs on his bow drill. We unveiled the display to members of the Arctic Bay community and the Inuit Heritage Trust in a private ceremony in April 2017, nearly four months before it was opened to the public.

The collaboration with the Arctic Bay community continues. We are currently producing an archive package of the archaeological research and forensic reconstruction for use by the community and its local school. Arctic Bay has also expressed interest in telling Nuvumiutaq’s story in a local display, and we are excited about working with them to bring his story back to his Inuit homeland.

Eight centuries ago, this man began telling his life story on his bow drill. Today, we are proud to be supporting the Arctic Bay community as they continue the storytelling.