As the summer draws to a close, some of us may find our meal plans changing from light summer salads and barbeque to those fall comfort foods that help keep us warm during the colder months. I am sometimes overwhelmed by all the choices we have for our cooking today. With just a few clicks of a mouse or a quick trip to our local stores or library, we can easily find the latest recipes for the season or learn about the en vogue ingredients that can spice up our favourite dishes.

It may be easier than ever to find new approaches to cooking, but it was not always the case. In the Rare Book Collection at the Canadian Museum of History, there is a copy of one of the most influential cookbooks in early modern French cuisine, one that introduced cooks from all across Europe and the new world to new choices in cooking: Le cuisinier françois. 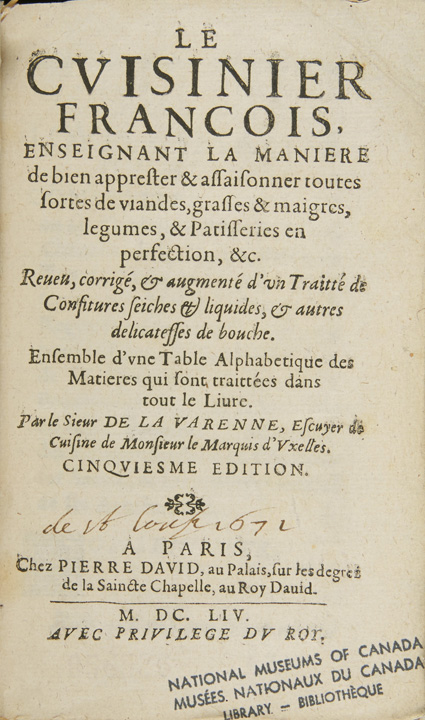 This seminal 17th century cookbook, written by François Pierre de La Varenne, marked the beginning of a new era in cooking. In de La Varenne’s recipes, fresh local herbs replaced the heavy use of imported spices that dominated the previous medieval style of cooking, sweet and savoury flavours were separated instead of being used in a single dish, and recipes were designed to complement the natural flavour of the main ingredient rather than mask it or imitate some other taste. Another major change was de La Varenne’s preference for butter instead of lard. He also emphasized the use of fresh foods, especially vegetables, and included some of the “New World” ingredients that had recently made their way to Europe from the Americas, such as turkey and the incorrectly named Jerusalem artichokes. Le cuisinier françois was the first publication with recipes for béchamel sauce and mille-feuille pastry, and it even includes an early form of hollandaise sauce in a recipe for “asparagus in fragrant sauce.”

The first edition of Le cuisinier françois was published in 1651. By 1653 an English edition had been produced, making it the first French cookbook to be translated into English. The publication influenced cooking all across Europe and even made its way to the New World, since copies were used in New France.

The Museum has the fifth edition of this influential cookbook, published in 1654 with the title Le cuisinier françois, enseignant la manière de bien apprêter & assaisonner toutes fortes de viandes, grasses & maigres, légumes & pâtisseries en perfection, etc.  The photograph below displays the recipe for partridge stew — a hearty recipe if ever there was one! 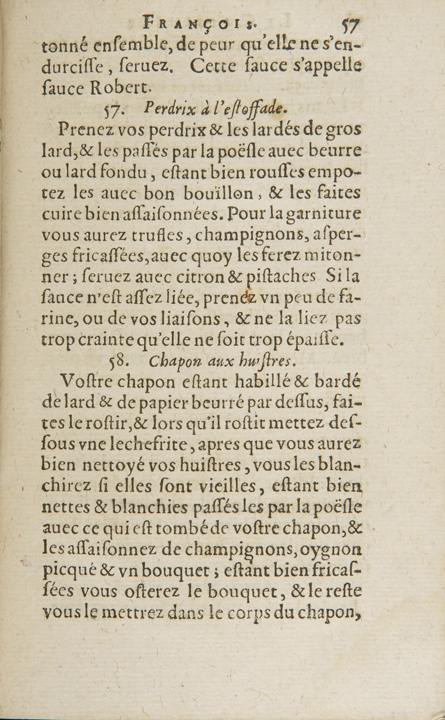 Take the Partridges and Lard them well. Put them in a Pipkin with Butter or melted Lard until they be reddened. Pot the birds in a good Broath, and leave them boyl until well seasoned. To garnish, add Truffels, Mushromes, Fricacie of Sporrages, and simmer the birds; serve with Lemmon and Pistaches. If the gravy be not thick enogh, add a small portion of Flower or other thickener; but add not o’er-much, for fear that the Gravy become too thick.

De La Varenne’s cookbook made recipes like this one available to anyone who could read, which made culinary knowledge easier to access. Still, as an admittedly amateur cook, I certainly appreciate that contemporary recipes provide a much more detailed, step-by-step approach!

Do you think you could whip up a stew using de La Varenne’s recipe? Does your family recipe call for similar ingredients? Let us know your thoughts in a comment below.