When modern science connects with the past

In 1912, and again in 1915, William J. Wintemberg, an archaeologist with the National Museum of Canada (today the Canadian Museum of History), excavated a site near Prescott, Ontario, which he named “Roebuck” after a nearby hamlet. The people who had once lived at the site were related to the Iroquoian language-speakers met and described by Jacques Cartier at Stadacona (today’s Québec City) and Hochelaga (today’s Montréal). But was the Roebuck site earlier or later than Cartier? And what can the site tell us about communities that had vanished by the time Samuel de Champlain sailed up the same river, less than a century later, to establish a permanent French settlement at the former site of Stadacona?

During the 1912 excavations, Wintemberg’s team found a piece of “carved bone,” which, Wintemburg noted in the catalogue, looked “suspiciously European.” It lay quietly in the Museum’s collection for more than a century. At one point, visiting researcher William Fox also noted this unique specimen, and mentioned it to me. His observation was filed away.

Development of the new Canadian History Hall required a new look at this country’s history. This process also required a thorough review of Canadian Museum of History collections for items that could be used to illustrate a new understanding of Canada’s past.

I was tasked with recounting initial contacts between Europeans and the First Peoples of Canada beginning with the Norse, and ending with Champlain’s establishment of Québec City in 1608. The “suspiciously European” bone item found at the Roebuck site soon came to mind. What was it? Was it clearly associated with the Indigenous occupation of the site? How old might it be?

The following account demonstrates, once again, the importance of preserving evidence of the past, and of making it available to new analytical techniques and new questions. 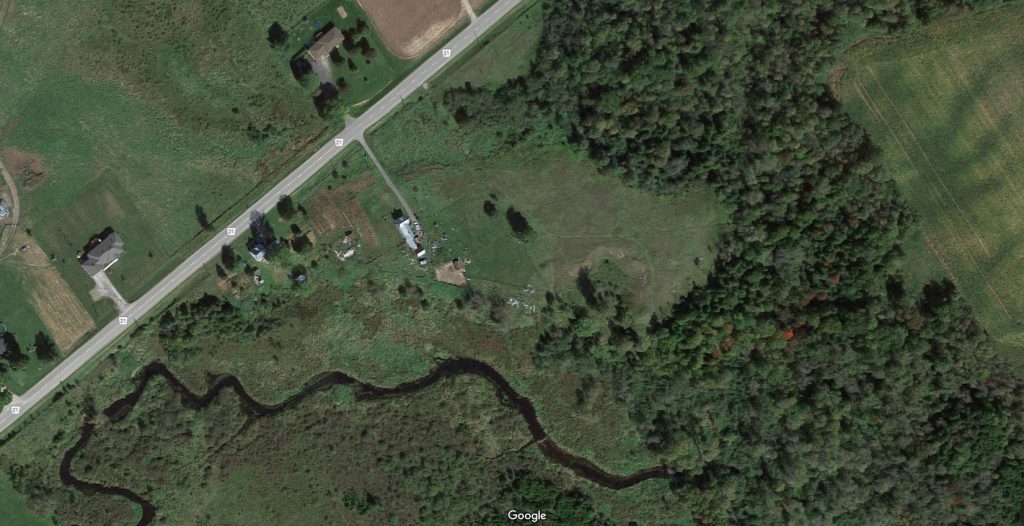 Modern aerial photograph of the Roebuck site. The bone needle case was found to the right of the photograph’s centre. Image: Google Maps.

The piece is made of bone measuring nearly 1 centimetre in thickness. It has clearly been turned on a lathe. In addition to featuring circular marks and perfect symmetry around a central axis, it has a pivot point at the blunt tip, and four sharp triangular indentations left by the chuck that held the piece in place while it spun.

I shared photographs with colleagues and friends, as well as with specialists I had never met. Several reasonable suggestions were made regarding its purpose, including a lace bodkin and a tuning peg for a stringed instrument. The best fit, however, was that it was a needle case: a container shaped on a lathe from a thick piece of bone, to store valuable metal sewing needles. The case would also have had a stopper attached to a deep groove just below the opening.

But why was this object left at this ancient Indigenous site? The needle case could have been left by people who established a farmstead on the former Indigenous site, centuries after its original occupants had left. Wintemberg, however, had indicated that the needle case was part of the Indigenous deposits he excavated, and thus not part of material left there in the 19th or 20th centuries.

So, how old is the needle case? Carley Crann of the A.E. Lalonde AMS Laboratory at the University of Ottawa was approached to help answer this fundamental question. Guiding the sampling process was the fact that the piece has great display value, and as such, any sampling had to be discreet and not change its appearance. 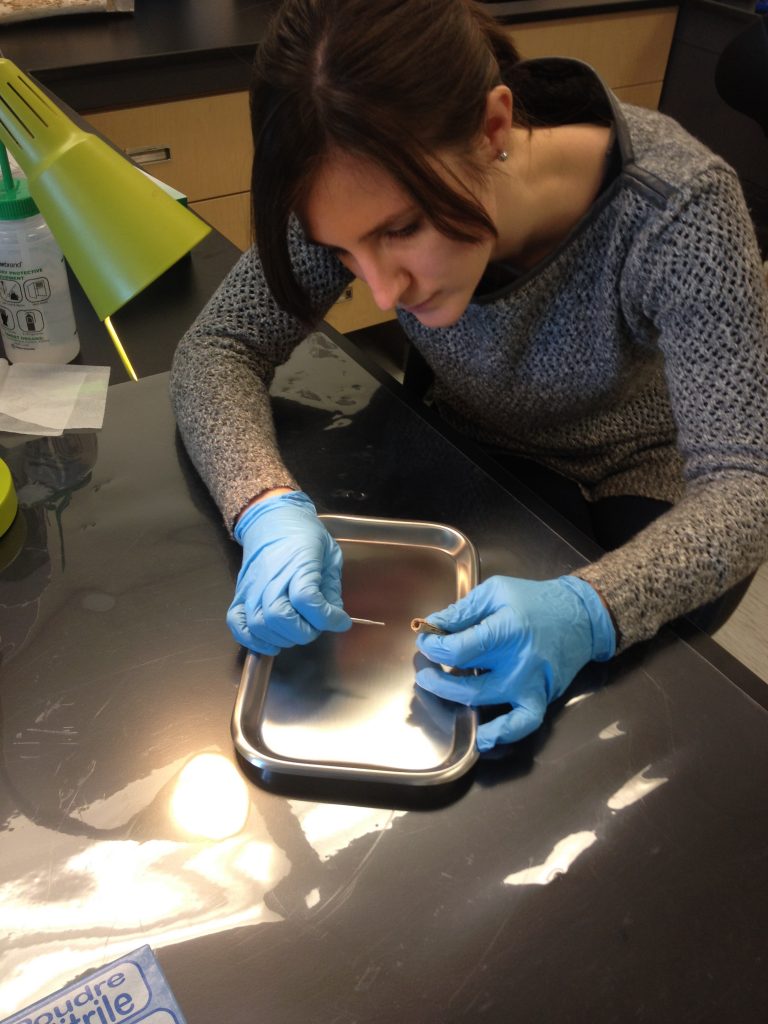 Crann decided to use a tiny drill bit to scrape away fine particles from the interior. The resulting sample of powdered bone was then subjected to a complex treatment and preparation procedure to purify it. This process also reduced the potential for error or contamination. The sample was now ready to be subjected to nuclear physics and be dated with an accelerator and a mass spectrometer, which literally counted the amount of radioactive carbon remaining since the death of the animal from which the bone had come.

The results indicated that the needle case is made of bone from an animal that died 237±69 years ago. Applying some statistical comparisons between this raw result and known radiocarbon curves, the likelihood is quite high that the needle case dates from between 1479 and 1707.

That’s a pretty big window of time, but further refinements were made by Jennifer Birch, who had recently dated samples of Indigenous corn kernels from Roebuck, as well as from similar sites before and after Roebuck in the Upper St. Lawrence Valley. This highly sophisticated analysis allowed narrowing of the needle case’s dates to 1520–1560 (good probability) or 1499–1578 (highest probability).

These are still broad chronological timeframes, and remain statistical statements of probability. At the same time, however, they strongly indicate that the needle case was acquired by occupants of the Roebuck site well before Champlain had ever seen the St. Lawrence Valley — at a time when the vast and seemingly endless stocks of fish and whales along Canada’s East Coast were attracting large seasonal fishing and whaling fleets from Europe.

This was a time when two very different worlds were learning about one another. Contact was sometimes direct, as during Jacques Cartier’s three expeditions (1534, 1535 and 1543), and sometimes indirect, as when Indigenous Peoples visited seasonally abandoned European whaling stations or camps. 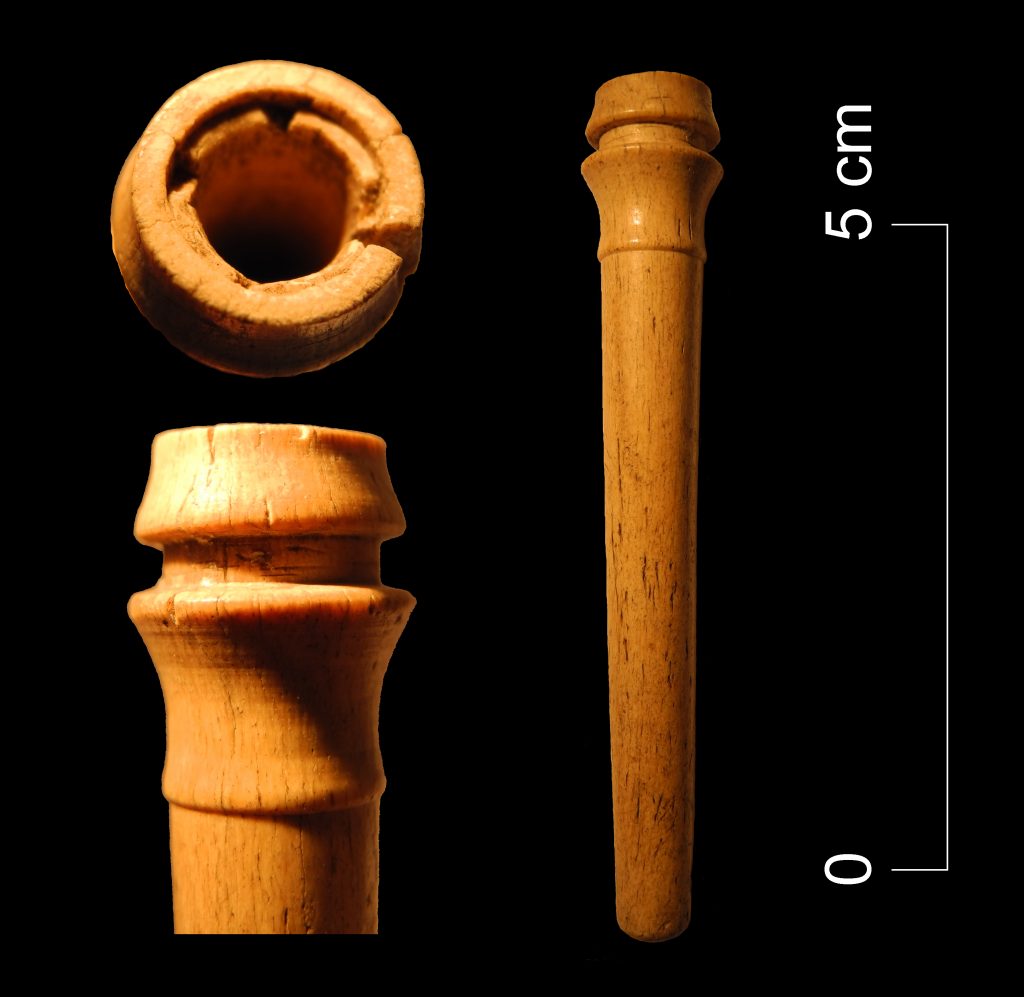 The Roebuck bone needle case with close-up views of the opening, showing triangular chuck marks and lathe marks on the neck of the case. Photo: Canadian Museum of History.

We can only wonder what stories reached distant inland communities such as Roebuck about strangers along the shores of the St. Lawrence River and the East Coast. There were certainly accounts of clashes and conflicts, just as there may have been tales of great boats and thundering weapons.

Was the needle case offered to a local hunter by a fisherman who had come ashore to replenish his ship’s freshwater supply? What was offered in exchange? And through how many hands did the needle case pass before being dropped at the Roebuck site?

These questions can never be definitively answered, but the dating of that “suspiciously European” bone implement brings to life a dynamic time in Canadian history, when the very definition of the world was being rethought and rewritten. As such, this humble piece of “carved bone” will find a place of honour in the Canadian History Hall when it opens to the public on July 1, 2017.