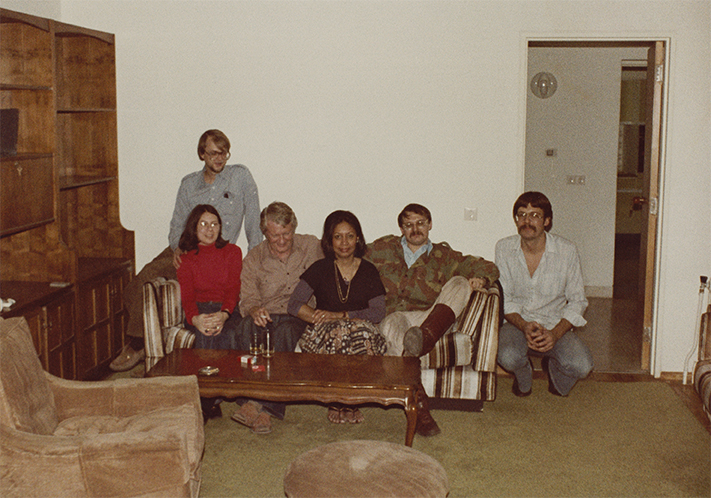 In 1979, six American “houseguests” feared for their lives, with good reason. But unlike their embassy colleagues, these Americans were about to escape from Iran — thanks to Canadian bravery.

Their incredible story, which became known as the “Canadian Caper,” was documented by Les Harris, a television producer who amassed a huge collection of raw footage and rare photographs.

The Harris material — including film reels, audiotapes, videotapes and boxes of documents related to his TV productions — has recently been acquired by the Canadian Museum of History. It tells the story of a sensitive time in world history, with a distinctly Canadian angle.

According to Olivier Côté, Curator of Contemporary Media and Communications at the Museum, “The new acquisition shows Canadians as active participants in recent world events, people who can do great things.”

The Canadians Côté is referring to are Ambassador Ken Taylor and his embassy staff. In November 1979, during the aftermath of the Iranian Revolution, student protesters overran the American embassy in Tehran, taking 52 Americans hostage for 444 excruciating days. But six American embassy workers eluded capture during the initial crisis. Taylor, knowing their lives were in danger, gave them secret shelter in the homes of Canadian staffers.

The “houseguests,” as they were known, stayed with Consular head John Sheardown and Ambassador Ken Taylor for three tense months until their risky evacuation. The Oscar-winning movie Argo was based on these events, though the film was Hollywood’s interpretation and did not fully detail the nerve-wracking efforts of the Canadians.

Front-page news around the world

Argo was based, in part, on the work of Les Harris. A former BBCTV film editor, Harris relocated to Canada in 1973 to work for CTV. He left his job at W5 at the time of the hostage crisis, because he saw a good story between the headlines and wanted to capture the real people and events behind the Canadian Caper.

His meticulous research included rare interviews with the houseguests, conducted shortly after their escape. Harris created two documentaries and one made-for-TV feature film using the research materials and footage that is now part of the Museum’s collection.

Harris — who spent 40 years in the film industry — says the escape helped place Canada as an international player: “It’s an important part of the history of Canada. It was a major success on the world stage and made headlines around the world.” The escape, Harris says, helped define Canada–US relations for decades to come.

Collecting recent history is part of the Museum’s mandate. Olivier Côté knows that reels of video and reams of paper don’t have the same immediate impact as traditional artifacts, but the stories they tell are enormously compelling. The challenge comes in making audio-visual materials accessible. “We would like to digitize the Harris materials,” Côté says, with an eye to making the collection available to the public.

Return to Inside History
3