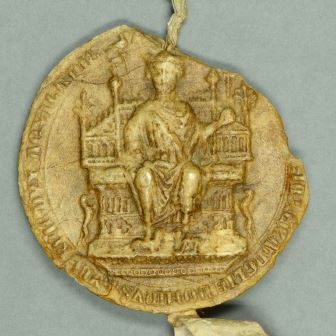 This precious document is the centrepiece of Magna Carta – Law, Liberty and Legacy, presented at the Canadian Museum of History until July 26 2015.

The Museum is the exhibition’s first stop on an exclusive six-month Canadian tour marking the 800th anniversary of the Magna Carta (Latin for Great Charter), which laid the foundation for modern democratic life. The Magna Carta expresses four key principles: that no one is above the law, not even the monarch; that no one can be detained without cause or evidence; that everyone has a right to trial by jury; and that a widow cannot be forced to marry and give up her property ― a major first step in women’s rights.

Echoes of the Magna Carta can be found in the Canadian Charter of Rights and Freedoms, the United States Declaration of Independence, the French Declaration of the Rights of Man and the Universal Declaration of Human Rights, amongst other historic documents.

Bianca Gendreau, Manager of the Museum’s research program Contemporary Canada and the World explains: “Visitors to the exhibition will learn about the historical impact of the Magna Carta and its ongoing relevance here in Canada and around the world. They’ll see how it remains a living document.”

Reining in a monarch

The exhibition also features the Magna Carta’s companion document, the Charter of the Forest, first issued in 1217. The Charter substantially reduced the size of the king’s forest, which had accounted for roughly a third of England. It also re-established the right of free men to hunt and farm in the royal forest and banned severe punishments for forest offences. The Charter in the exhibition was drafted in 1300 and is also from Durham Cathedral.

The original Magna Carta was created in 1215 by England’s barons, determined to curb the arbitrary powers of King John I. If the king was unhappy with a baron, he could confiscate the baron’s lands, take his relatives hostage or marry his daughters off to men chosen by the king. As well, John was constantly demanding money from the barons to fund his futile military campaigns in France.

When the barons captured London in May 1215, King John was forced to meet their demands, expressed in the document that came to be known as the Magna Carta. Although King John repudiated the Magna Carta within months, it was revived by his immediate successors. The Magna Carta in the exhibition is the best preserved of seven surviving copies of the final version, issued by King Edward I in 1300.

The exhibition was made possible by the work of Magna Carta Canada, founded by Len and Suzy Rodness to foster a national dialogue about the legacy of the Magna Carta and the Charter of the Forest.

Image: Front of the great seal of Edward I on the Magna Carta that was issued by the King in 1300. © Chapter of Durham Cathedral

To learn more on the exhibition, click here or visit our blog.