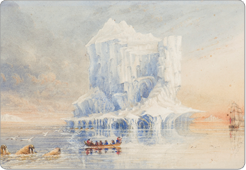 In 1954, Paul Cooper was searching for traces of Sir John Franklin’s lost expedition, when an Inuit man approached him with a story. The man had found an old plank near the site where, according to local lore, one of Franklin’s ships had been crushed by ice a century earlier. Could the weathered board belong to the ill-fated Erebus or Terror?

The Inuk gave the plank to Cooper, an author and amateur Arctic historian, who sent it to the National Archives in Ottawa with a note identifying it as a possible Franklin relic. Eventually, the plank found its way into the history collection of the Canadian Museum of Civilization. There it remained, catalogued but forgotten, until Arctic archaeologist Karen Ryan rediscovered it last October while compiling a small exhibit on the Northwest Passage.

“I was back in the collections room, looking for something, and I saw up on a shelf above my head a tag hanging down with an artifact number,” she recalled. “I could just barely see it, standing on my toes, and I’m like: ‘Ah, I have to get this!’”

Intrigued by Cooper’s hand-written note, Dr. Ryan began to search for more evidence linking the artifact to Franklin’s ships, which disappeared in 1848 and have never been found.

The plank measured 7.6 centimetres thick, and contained a 21-centimetre handmade nail. The nail was of the sort that British shipwrights used to fasten deck planks in the 19th century — the right time period for the Erebus and Terror. Dr. Ryan ordered the ships’ plans from the National Maritime Museum in Greenwich, England, and discovered that the deck planks of both vessels were made from 7-centimetre thick wood, specifically fir. She consulted with the Parks Canada conservation lab to determine whether the plank was made of fir. The experts identified it as pine.

“I said: ‘What do you mean it’s pine?’” Dr. Ryan recalled. The confusion cleared as she delved further into 19th century shipbuilding reference books, and found that the words “pine” and “fir” were used interchangeably.

Though the artifact could have belonged to another British ship, one further piece of evidence indicated a Franklin connection. The plank was found at Franklin Point on King William Island, just 30 kilometres south of the last recorded location of Franklin’s ships, and near to where Inuit people, interviewed by search parties in the late 19th century, reported seeing a European ship crushed in pack ice.

Though the proof is not conclusive, Dr. Ryan says the plank may give clues about where to look for the remains of one of Franklin’s lost vessels.

“If this plank is from one of the ships, then look again at the Inuit oral history about the ship being broken up in the ice on the Northwestern part of King William Island,” she says. “The two might help validate each other.”