Lockdown has made many of us consider the spaces in which we live. How do our workplaces or homes affect our daily habits, diets, structures, transportation and the people with whom we interact? These questions are nothing new, but our sensitivity to such issues has become more acute than ever before.

Against this backdrop, a new book in the Mercury Series — Sharing Spaces: Essays in Honour of Sherry Olson, edited by Professor Robert Sweeny — should interest just about everyone. For over 45 years, the quest to explore and understand space lay at the heart of Professor Olson’s research, and her work has since stimulated new generations of scholars. 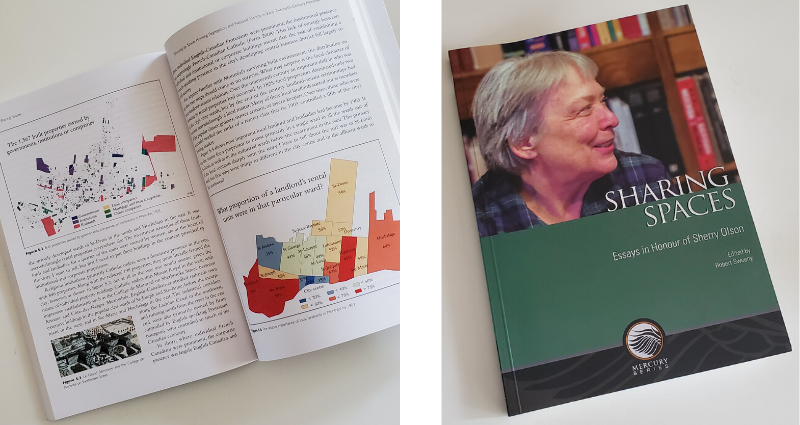 In the 1980s and early 1990s, Sherry, with her students, created many of the databases that would enable researchers to zoom in and out — and, thereby, to begin writing a qualitatively different type of urban historical geography.

The book, more or less wrote itself. Because what I decided to do, fairly early on, was to create through a reading of the book a reconstruction of Sherry’s own life history.

The collective efforts of Sherry Olson and her team to understand space, street by street and house by house, are perfectly captured in this book. It is a truly cooperative undertaking, compiling a series of essays on urban and historical geography. Who owns the buildings? Who rents them? How do they relate to infrastructure? There are many questions in this book, but many answers too. And regardless of the reader’s main interests, the data is fascinating.

One foot in time, the other in space — which is as it should be. Montréal was usually the subject of my research. In visiting les Archives nationales, who should I run into now and then, but Sherry Olson. Or out on the sidewalk near the Main, there she is, smiling face ready for an impromptu conversation. What a friendly face, and what a scientific undertaking! … Cheers to one of the greats in historical geography.

There is no doubt that this book will be of particular interest to anyone who loves Montréal. Have you ever wondered how the Village developed and evolved over time? Have you wanted to explore the history of the city’s hospitality industry by following the footsteps of Angélique Archambault, or to read a study on the impact of Protestants and Catholics on the urban environment?

Beautifully illustrated with colour maps, this book will delight aficionados of geographic information systems, or GIS. Thanks to numerous maps and illustrations, the reader can follow everything from the evolution of marriage over a century in Québec City to the roots of the people of Trois-Rivières, and see examples of Sherry’s approach as it has been used in New Zealand and Chicago.

In more ways than one, Sherry has occupied and shared rich and varied spaces during her long career. She supports and shapes them in different ways, starting with interdisciplinary spaces relating to geography, history, demography and sociology, then expanding to include the world in which we live, and in which our ancestors lived. It is ultimately a field of study that has no disciplinary boundaries.

Offering a way to comprehend the world differently, through data, figures, time and space — and abounding in colour, illustrations and humanity — this book is sure to delight readers of all interests.

Pierre M. Desrosiers is editor of the Mercury Series, and Curator of Central Archaeology, at the Canadian Museum of History.

Watch the book launch on the University of Ottawa Press YouTube channel.