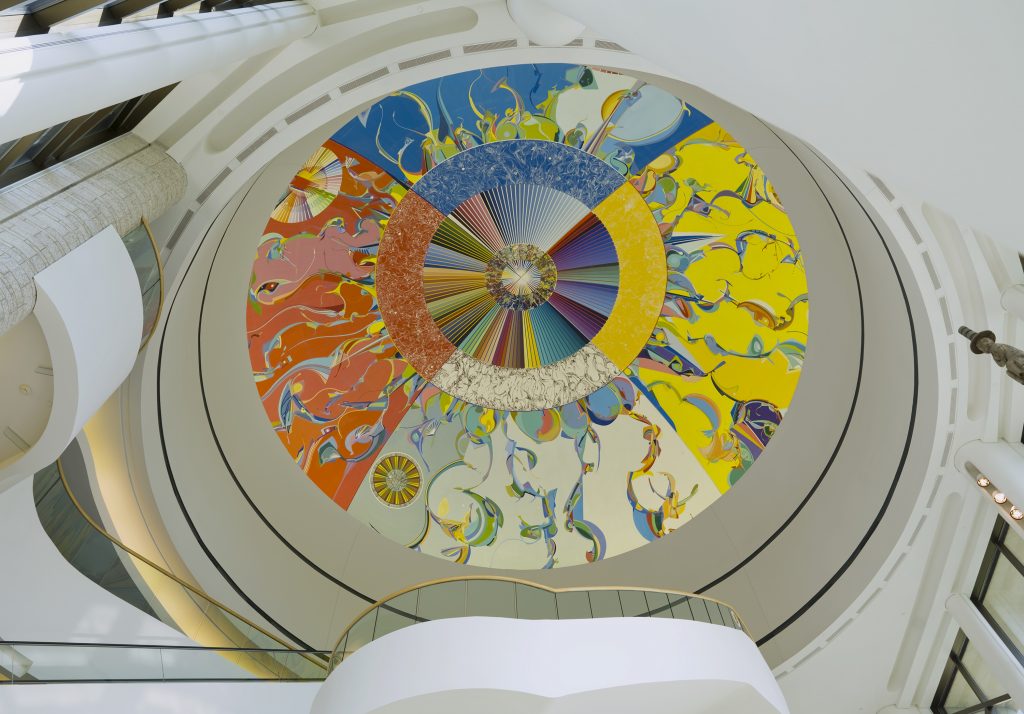 View of Morning Star looking from the ground level up to dome. Photo: Canadian Museum of History

In the 20 some years since Alex Janvier completed his abstract masterpiece, Morning Star, in September 1993, it has been admired by millions of awestruck visitors, gazing up at the domed ceiling of the Grand Hall. But how many of those visitors, entranced by the striking colours and juxtaposition of geometric lines and sinuous shapes that make up the 19-metre wide circular painting, could appreciate the complex symbolism and profound meaning embedded in the artwork?

In 2014, Morning Star’s 20th anniversary presented an ideal opportunity to renew focus on a painting that some have called the Canadian Museum of History’s Sistine Chapel. Thanks to a generous donation from Morning Star’s original patrons, Toronto philanthropists Ralph and Roslyn Halbert, the Museum has been able to develop an interactive website that highlights the cultural and artistic significance of this masterpiece.

“Morning Star is one of the most important works of art in our National Collection, but its meaning isn’t necessarily obvious to the casual observer,” said Lee-Ann Martin, former Curator of Contemporary Canadian Aboriginal Art at the Canadian Museum of History. “We created an enhanced interpretive experience that explains the symbolism of the work, introduces the artist and tells the fascinating story behind the painting.”

Janvier’s magnum opus illustrates the history of this land from the artist’s Dene Suline perspective. The white circle in the centre is the morning star, a guiding light and the source of all creation. Shards of colour radiating from the star — suggestive of traditional Dene quillwork — represent Aboriginal cultures, while more organic, curvilinear shapes represent the introduction of European ideas and beliefs. Morning Star depicts five centuries of conflict and coexistence, while at the same time expressing hope for mutual respect and conciliation between Aboriginal and European traditions.

The interpretive platform, optimized for smartphones, tablets, laptop and desktop computers, provides a 360-degree view, plus a zoom feature that allows actual and virtual visitors to immerse themselves in the work. The interface links to a wealth of multimedia resources that add context and background information about Morning Star, its history, the artist and the techniques he used to create the painting.

Visitors can take advantage of free WiFi and the lounge area below the painting to contemplate and explore the artwork. A separate restoration project, also underwritten by the Halberts, ensures that Morning Star shines bright well into the future.