A Glimpse Into the History of Cobalt, Ontario 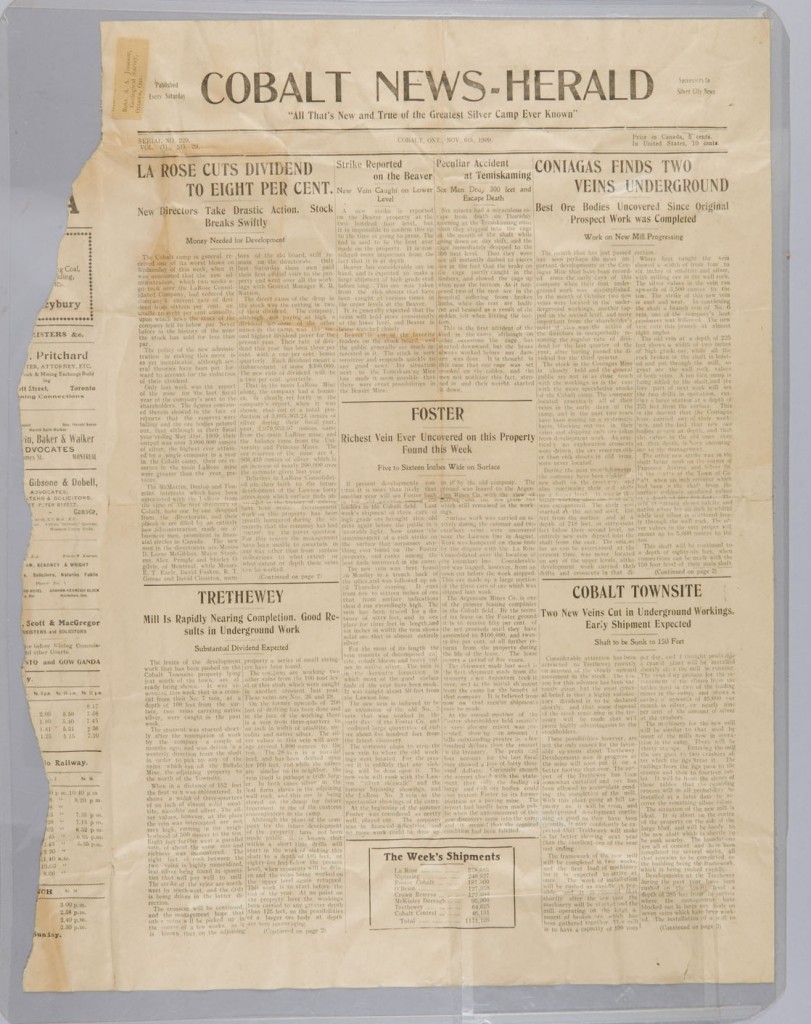 On August 7, 1903, two railway contractors in search of lumber for railway ties near Long Lake, Northern Ontario, discovered a substance that proved to be silver. By the end of that year, other discoveries were made. The news spread like wildfire from the press to would-be prospectors and investors. They came by the thousands up the Temiskaming and Northern Ontario Railway to the town of Cobalt: English and French Canadians as well as Finns, Russians, Poles, Greeks and Italians. In 1905, 16 mines were active in the Cobalt area. By 1911, there were 34 mines producing 30 million ounces of silver. The population of Cobalt grew quickly from just 100 in 1903 to 10,000 in 1909. The silver boom was of national significance because it helped sustain stock exchange and investment frenzy in the financial markets of Montréal and Toronto, and even on Wall Street.

This edition of the Cobalt News-Herald from November 6, 1909 shows a town still very much in the throes of a boom. There are reports of three new strikes or silver veins. The statistics on ore shipments from eight different producers are impressive. On a more serious note, the newspaper reports that a few men experienced a close shave with death when the cage carrying them down the Temiskaming mine suddenly started to plunge. Not evident on the Cobalt News-Herald’s front page is the general hardship hundreds were still experiencing following a great fire that occurred earlier that year in July. The fire started at a Chinese café, leaving 150 buildings destroyed and 3,000 people homeless. Completely devoted to silver mining, Cobalt had been hastily built during the first years of the 20th century; there wasn’t even a municipal water and sewer system. The place burned with considerable and deadly ease. Loss of life from the fire was not overwhelming; a young Italian man and a French (Canadian) girl, according to the Toronto Globe, were among the victims. However the fact that so many were forced to live out of doors, with their only source of drinking water coming from a contaminated water table, did produce a crisis situation. In the summer and fall of 1909 Cobalt experienced a typhoid outbreak in which 111 lost their lives. The fire of 1909 was a double-barrelled tragedy for the “silver city” of North Ontario.

Find out more about this Cobalt News-Herald edition.

Find out more about the history of Cobalt in this online exhibition from the Virtual Museum of Canada.