The doll with evil powers and stuck with pins has become the image most often associated with Vodou. This has nothing, however, to do with the real practice. 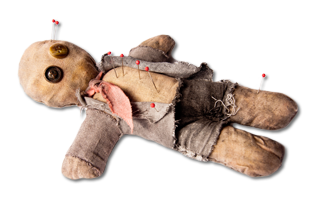 Dolls are occasionally used in the practice of Haitian Vodou, but their use is very different; they are not used to cast spells. Placed near graves or hung from the branches of trees, they serve to convey messages sent by Vodouists to the dead, or to ancestors.

During the American occupation of Haiti from 1915 to 1934, books and films aimed at the general public propagated many of the clichés that continue to insult Vodou to this day by associating it with evil sorcery.