The Power of Objects: Displaying Artifacts That Belonged to Terry Fox

Objects are powerful: they are windows into the times when they were made and used; they are entryways into the ideas and values of their creators and owners; they are mirrors to our own humanity.

At the Canadian Museum of History, I work on developing the visitor experience for our exhibitions, so the behind-the-scenes world of artifact care, conservation and display is exotic and mysterious to me, and I appreciate peeks into the expertise of my colleagues in collections.

One morning last winter I was invited to meet with Paul Vardy, one of the Museum’s preparators, to discuss plans for displaying artifacts in the exhibition Terry Fox – Running to the Heart of Canada (creative development specialists like me work with the artifact preparators and other colleagues to ensure that the approach to displaying artifacts will complement the overall experience we create for our visitors). Paul showed the exhibition curator, Sheldon Posen, and me the items he was preparing: Terry Fox’s iconic t-shirts from the Marathon of Hope. In our planning, Sheldon and I included the t-shirts as evocative examples of Terry Fox’s unwavering focus on his mission to raise money for cancer research.

I was, admittedly, blind-sided by the power of the objects that were laid out in front of us. Here I was, looking at four worn, stained, faded t-shirts that were precious examples of Canadian heritage. These were the real thing: Terry Fox had worn those t-shirts over 143 days and 3,339 miles during the summer of 1980.

We got down to details. Paul is an expert on, among other things, creating mounts that support fragile artifacts safely and securely. He made body forms that filled out the t-shirts, but didn’t stretch them. We discussed the height and the volume of the mounts. We agreed that we wanted to suggest Terry’s presence, but not be too literal in recreating Terry wearing them. 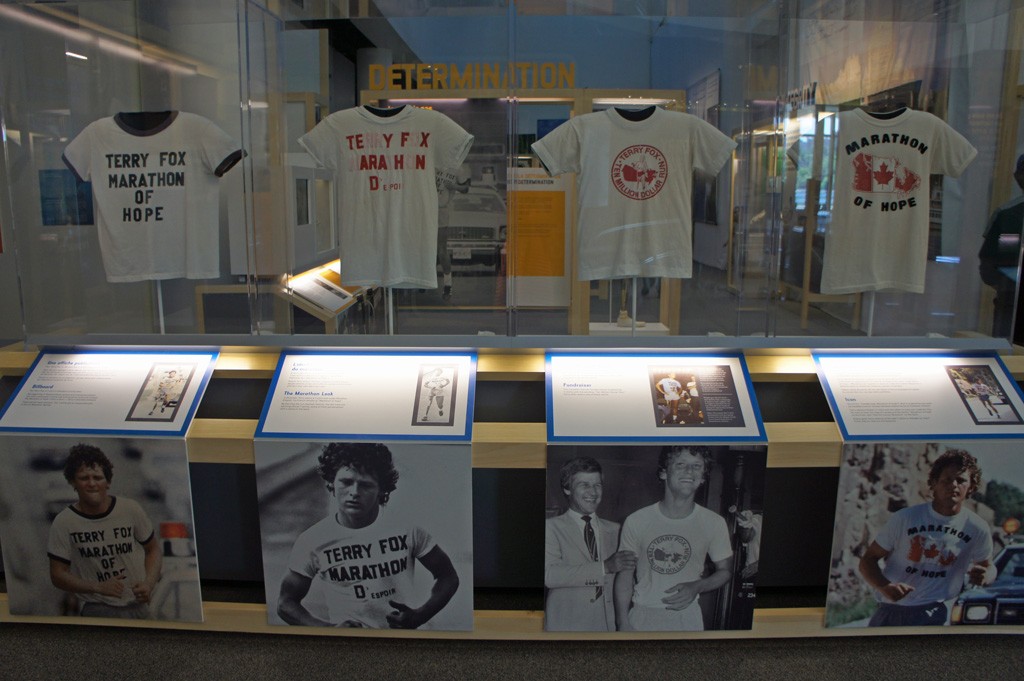 Four of Terry Fox’s Marathon of Hope t-shirts on display. Terry Fox communicated his mission with unwavering clarity in everything he did, including the t-shirts he wore. All of these artifacts are on loan from the family of Terry Fox. Canadian Museum of History, Photo: P. Corrigan.

This first meeting led to more with Paul and other colleagues. Preparator Caroline Pilon showed us the mount she made not only to hold Terry Fox’s artificial legs safely in place and on display, but also to make them accessible for visitors to study. Terry’s artificial legs are key to understanding his ability to endure pain and his determination to overcome challenges. We decided that the two artificial legs — Terry’s favourite and his spare — should be displayed almost as if we were face to face with Terry. If they were too high, they looked too abstract, too sacred. When we put them at human height, visitors could see how rudimentary they were, yet could also appreciate that these mechanical objects were capable of getting Terry halfway across the country. 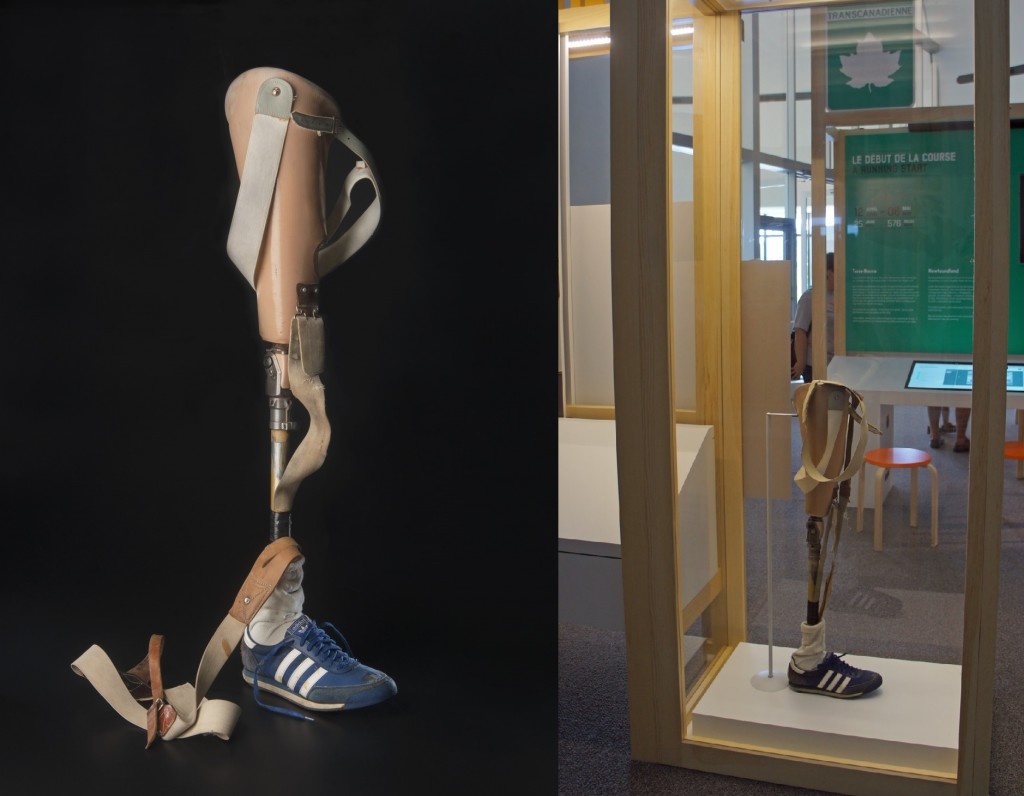 At another meeting, we confirmed with collections coordinator Danny Gray that Terry Fox’s jug of water from the Atlantic Ocean had safely arrived at the Museum. Danny had packed the large glass jug so that it stayed unbroken and unspilled during its voyage by rumbling truck all the way from British Columbia to Gatineau, Quebec. It is now securely on display, still filled with the ocean water that Terry collected on the first day of the run. 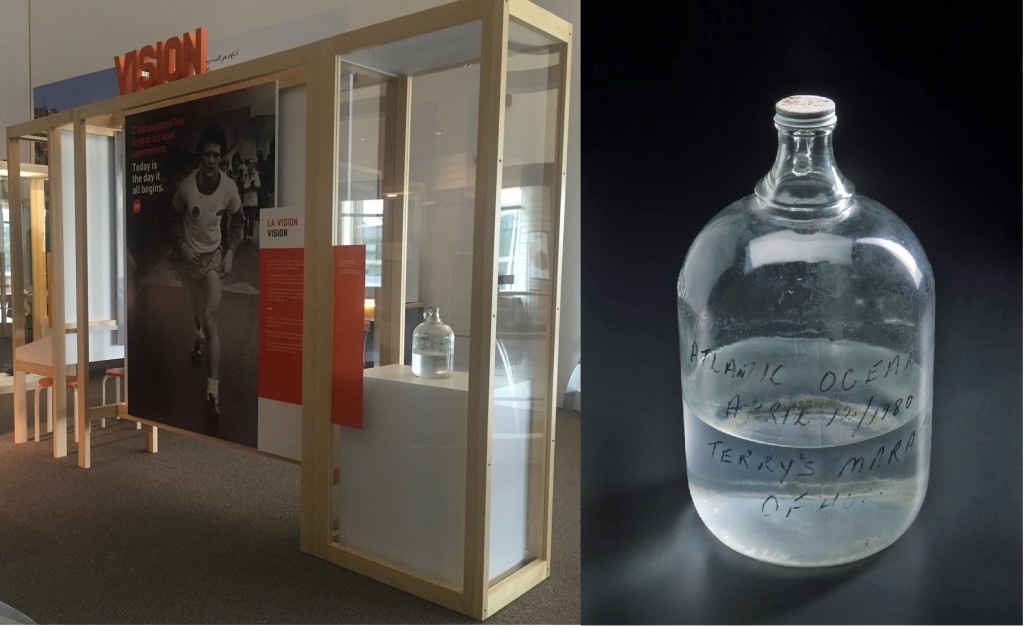 During each of these meetings, I first had to catch my breath. We had been talking for months about the ability of the objects to tell the story of Terry Fox, accompanied by photos, texts, videos and interactive elements. Each time I saw one of the actual objects in person, however, I was impressed by its power.

I am always fascinated by the expertise that is required to safely store, handle and display museum artifacts. I jump at any chance to see the behind-the-scenes work of my colleagues in collections. Theirs is a special type of expertise: they make it possible to share with our visitors the fragile parts of our heritage so that we can all experience being up close to the real thing.

One response to “The Power of Objects: Displaying Artifacts That Belonged to Terry Fox”