The burden of proof

When the Canadian History Hall opens on July 1, it will tell Canada’s many stories using genuine artifacts — authenticity is one of the founding principles of the Hall. But this raises an important question: How can we be certain that an artifact is authentic?

More than 3 years ago, the Halter family of Winnipeg approached Museum historian and curator Timothy Foran with a robe. The family believed that it was worn by magistrate Hugh Richardson when he presided over the three most famous court cases in Canadian history: the trial of Louis Riel for high treason in late July 1885 and the trials of Pītikwahanapiwīyin (Chief Poundmaker) and Mistahimaskwa (Chief Big Bear) for felony treason later that summer, in Regina.

There was no doubt that Richardson’s robe would be an important addition to the Hall. Its inclusion would represent a formative though unhappy chapter of our colonial history: the 1885 North-West Rebellion and its aftermath. But would Foran and other Museum experts be able to prove that this robe belonged to Richardson?

The Halter family strongly believed that the robe in their possession had been worn during the Riel trial. This belief had inspired them to safeguard it as an heirloom ever since G. Sydney Halter, a prominent Winnipeg lawyer and civil rights advocate, had been entrusted with it in the 1940s. Foran respects the Halter family, calling them great friends of the Museum, and he wanted to believe that the robe was “the real McCoy.” However, his job was to discover the truth. So, putting on the mantle of devil’s advocate, he set out to disprove the family’s claim. 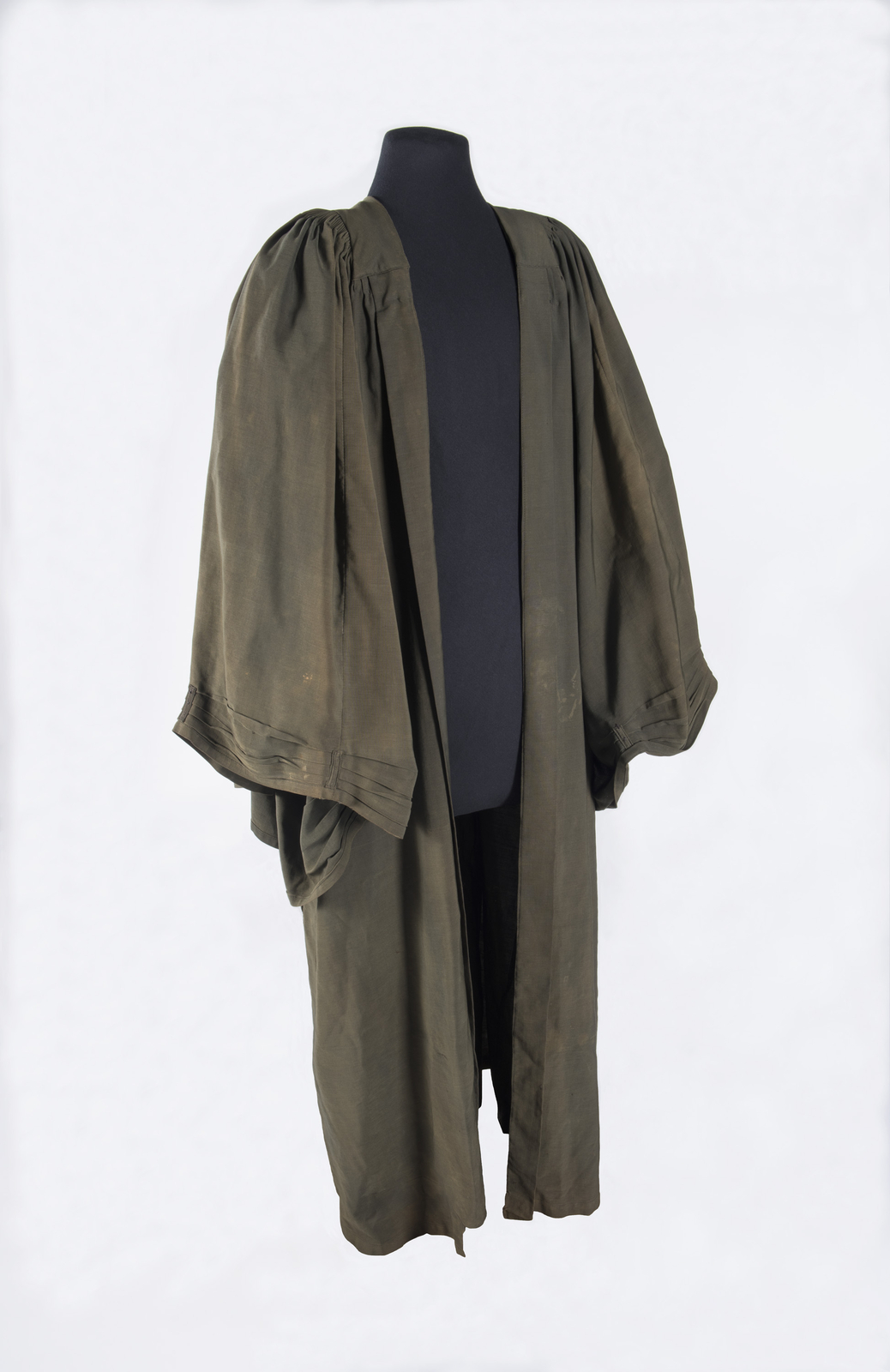 After over 3 years of investigation, all the pieces of evidence make a sound case for the robe having been wore by magistrate Hugh Richardson who presided over the three most famous court cases in Canadian history. Canadian Museum of History, 2013.54.1

The most obvious way to do so would be to find the Richardson robe in someone else’s possession. Foran consulted archives, newspapers and other historians, but was unable to find evidence contrary to the Halter family’s oral history.

Next, he collaborated with colleague Caterina Florio, the Museum’s expert in textile conservation. They sent the robe to the Canadian Conservation Institute for analysis, which revealed that the cloth had been mordanted with chromium and dyed with logwood, a technique popular in the 1870s, when Richardson became a magistrate. This dyeing technique produced a colour known as “chrome black,” which has the unfortunate characteristic of fading to a drab greenish-grey. This is the exact colour of the robe.

The next fact to investigate was that the robe in question is not a judge’s gown, but a humble barrister’s robe. Wouldn’t Richardson have worn a judge’s robe to preside over these important trials? No, said the legal historians Foran consulted. For a number of reasons particular to the justice system at that time, Richardson would indeed have worn a barrister’s robe during the state trials of 1885. And, according to an expert on court dress, the robe shows signs of wear, tear and repair that could reflect Richardson’s extensive circuit-court travels throughout Western Canada.

A conclusion is reached

Every avenue Foran explored led to the same conclusion. There is no evidence to disprove the Halter family’s oral history. In fact, seen together, all the pieces of evidence make a sound case for the robe having been Richardson’s.

Following minor conservation treatment, the robe will be displayed on a custom-made mannequin designed to prevent any stress on the materials from tension or gravity. After over 3 years of investigation, the verdict is in, and the robe will take its place in the new Canadian History Hall.

3 responses to “The burden of proof”