Shedding light on the Great Darkness 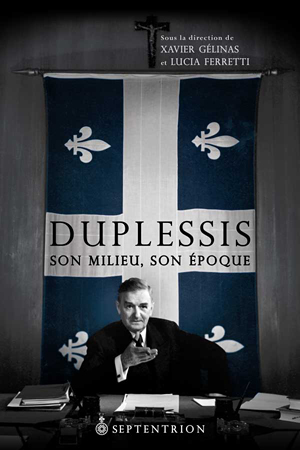 It’s almost impossible to discuss the recent history of Quebec without coming across Maurice Duplessis. The man whom everyone called “The Boss” left a tumultuous legacy that continues to spark debate. The life and times of this controversial character is explored in a fascinating new book, Duplessis, son milieu, son époque, co-edited by Dr. Xavier Gélinas of the Canadian Museum of Civilization.

On September 7, 1959 Maurice Duplessis, Premier of Quebec, died in office. In the following weeks, his successor Paul Sauvé, commissioned a statue in his memory. The statue was delivered in 1960 after the Jean Lesage Liberals take power. They promptly decided to put the monument in storage rather than risk stirring up a hornet’s nest with its installation. The Duplessis legacy was thus silenced as the Quiet Revolution that followed saw the province undergo major social and political upheaval. Almost twenty years go by before René Lévesque finally inaugurated the monument in 1977.

This anecdote is an example of the controversial legacy left by Maurice Duplessis. Member of the Quebec legislature for nine consecutive mandates and Premier for five mandates (the last four of them consecutive), Duplessis left an indelible mark on both his province and on the psyche of Quebecers. Some 50 years after his death, his name remains a source of mixed emotions.

Duplessis presided over a period of Quebec’s political history marked by patronage and corruption known as the Great Darkness…and yet he is responsible for bringing electricity to rural Quebec. He led the violent repression of striking miners in Asbestos and Murdochville, yet created over 100,000 jobs in ten years. He gave the fleur-de-lys flag to proud Quebecers, yet is the man behind the ‘Padlock Law’, which seriously curtailed their civil liberties and could deny access to property used by suspected communists. ‘Historians continue to scrutinize, analyze and reinterpret the impact of his decisions. In 2009, a symposium was held to commemorate the 50th anniversary of his death and engage the community in further reflection on the man and his mark. The following autumn, the proceedings of this symposium were published by Septentrion under the expert guidance of Dr. Xavier Gélinas of the Canadian Museum of Civilization.

As Curator of Canadian Political History, Dr. Xavier Gélinas designed the associated research program to include collections, expositions, publications and conferences. Some subjects cut across all of these themes. This was the case with the exhibition on Maurice Richard in 2004 when his colleague Sheldon Posen simultaneously created a collection of historic ‘Rocket’ memorabilia, prepared an exhibition and wrote a book on the subject which was sold in the Museum’s boutique.

The Museum also encourages research and publications that do not have a direct link to one of its existing collections or exhibitions. In the case of Duplessis, the Museum decided to invest in a new effort to broaden our understanding of Quebec’s sociopolitical history. This is how Dr. Xavier Gélinas, who had a long-standing interest in Quebec nationalist and conservative thought, came to embark upon the adventure of holding a symposium and creating a book on Duplessis.

Duplessis, son milieu, son époque, edited by Gélinas in collaboration with Dr. Lucia Ferretti, professor of humanities at the University of Quebec in Trois-Rivières, gathers essays by 32 experts in what has been qualified as the ‘first serious historical research effort in 30 years.’ The fresh perspective that can only be gained with the passage of time has permitted these scholars, historians and authors to take an objective look at one of the most controversial periods in Quebec’s history, casting the Great Darkness in a new light.

Would you like to shed some light on the period known as the Great Darkness? Pick up Duplessis, son milieu, son époque at the Canadian Museum of Civilization Boutique or get in on-line at our Cyberboutique.

Return to Inside History
1