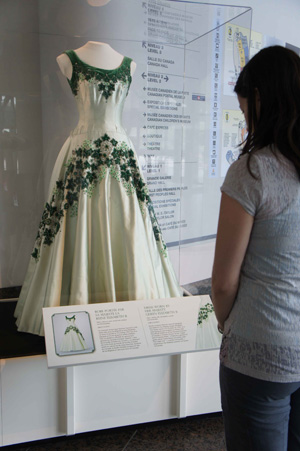 Blazer by Canadian design house Smythe Les Vestes. Dresses by Montreal-born designer Erdem Moralioglu. Crimson hat adorned with maple leaves. The wardrobe of Kate Middleton, Duchess of Cambridge, was a major thread of conversation during her recent visit to Canada. But it is certainly not the first time that royal garb has been the talk of the town!

The royal couple’s first visit to Canada drew an impressive amount of Canadian and international media attention – and a bright fashion spotlight shone on the Duchess’ attire. Videos, photos, blogs…pundits used every means imaginable to herald her flair for fashion. In keeping with this spirit, the Canadian Museum of Civilization has taken the opportunity to commemorate the couture of a previous royal visit…

Queen of the ball

For many, the image of Elizabeth II has evolved from that of a somewhat stern-looking mature woman to the grandmotherly figure we know today. Unless you are of a certain age, it is difficult to imagine the young woman she once was: smiling, delicate, feminine. And yet, Elizabeth II charmed Canadians with her youthful elegance during her first visit as Queen in 1957.

Crowned in 1953, Elizabeth II had planned a tour of Canada in 1959. When she announced her intention to visit the US in 1957, however, Prime Minister Louis St-Laurent was not about to let her slip through his fingers…if the Queen was to cross the Atlantic, did she not have a duty to visit a country of which she was, after all, the reigning monarch? The invitation was accepted.

In June of that year, a general election transformed Canada’s political landscape: St-Laurent’s Liberals were defeated, ushering in Progressive Conservative John Diefenbaker as Prime Minister. As a fervent monarchist, Diefenbaker hoped to have his government bask in the glory of the royal visit. He therefore invited the Queen of Canada to open the 23rd Parliament on October 14, 1957.

The official visit drew hundreds of thousands of people. Admirers and the curious came out in droves, hoping to catch a glimpse of the young Queen…and, of course, to admire the elegance of her attire.

One can easily imagine that her Majesty Queen Elizabeth II possesses a vast wardrobe, as befits a queen, and that the items she packs for an official visit are carefully selected. More than a mere fashion statement, royal attire is steeped in symbolism and can even play a strategic role, reminisces Dr. Stacey Barker, Assistant Curator of Political History at the Canadian Museum of Civilization.

For her first foray on Canadian soil, Elizabeth II elected to pronounce her Speech from the Throne garbed in the very dress she wore for her Coronation – a clear affirmation of her status as Queen of Canada. It was, however, the dress that she wore to a state dinner at Rideau Hall that would capture the imagination of Canadians.

The evening gown worn by the Queen was designed by her personal couturier Norman Hartnell, and paid homage to Canadian tradition. Made of pale green satin, the elegant sleeveless dress was decorated with maple leaves in dark green velvet, thrown into relief with white roses of York. This flourish of flora was adorned with rhinestones and simulated emeralds and pearls. A waist-hugging bustier was fastened to a long crinoline skirt with a hem that measured over 5 meters in diameter! In short, Hartnell had created for the occasion a dress that was truly ‘fit for a queen’, one that embodied Elizabeth II’s regal power as well as her attachment to Canada.

The Canadian Museum of Civilization has taken the opportunity to mark the recent royal visit by exhibiting the celebrated dress, which has been in our nation’s care since 1967. A cherished symbol of Canada’s monarchical tradition, the dress is a testament to the tightly-knit ties that bind Canada to its Queen.