Georges St-Pierre won this belt at the Ultimate Fighting Championship (UFC) 94 in 2009. It was the first match where two UFC titleholders faced off — St-Pierre, then the Welterweight Champion, and B. J. Penn, then the Lightweight Champion. St-Pierre defeated Penn in four rounds. The belt evokes the spectacle of ultimate fighting itself: it is oversized, solid and a little bit flashy. It also represents recent transformations in Canadian fitness practices that St-Pierre has helped to inspire: the rise of mixed martial arts (MMA), extreme sports and cross-training. 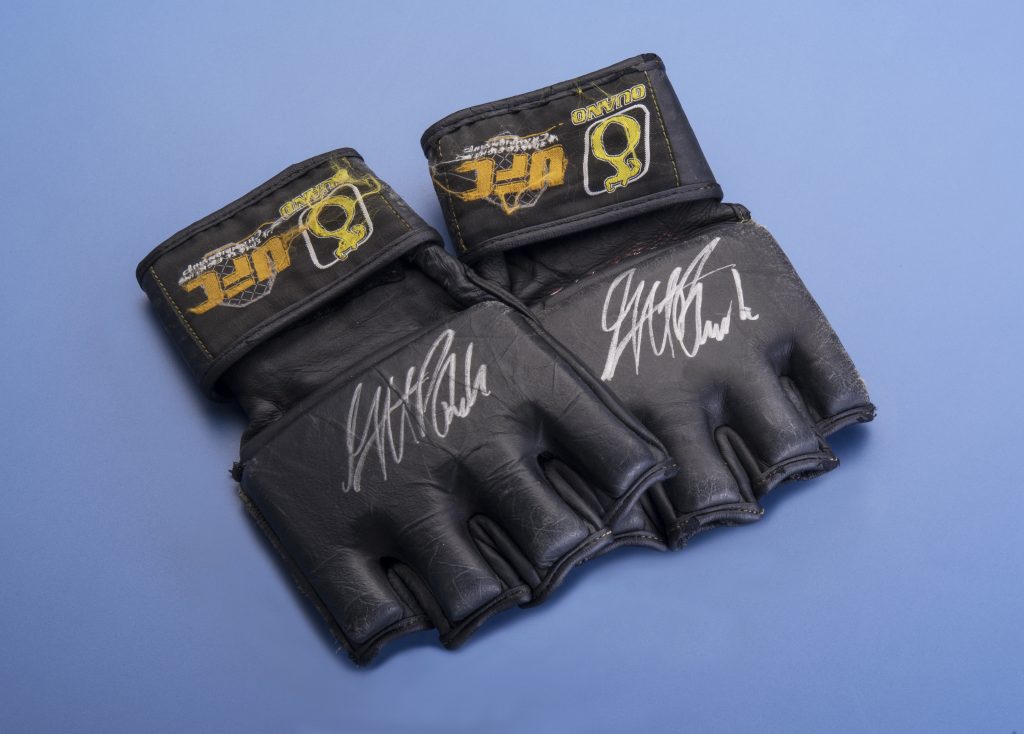 Growing up in Saint-Isidore, Quebec, St-Pierre (known as “GSP” and “Rush”) often struggled. As a child, he had to have major surgery to deal with kidney problems. He was bullied at school, ranging from having his lunch money stolen to his “tear-away” pants ripped off. Initially, St-Pierre took to fighting to defend himself. After seeing Royce Gracie win UFC 1 in 1993, he became fascinated by MMA. At 17, St-Pierre travelled to New York City to train at Gracie’s gym. He spoke no English at the time but impressed the coaches with his athleticism and discipline. Today, despite being on hiatus, St‑Pierre holds the UFC record for most wins in title bouts. The UFC rating website, Fight Matrix, lists GSP as the number one fighter of all time.

St-Pierre said in an interview that he hoped to be like Wayne Gretzky, by acting as an ambassador for his sport and increasing its audience. In many ways, St-Pierre has carved out a path that echoes other Canadian sport celebrities. He’s been a leader in his sport by promoting the adoption of stricter rules and sportsmanlike conduct in the octagon. He’s also been vocal about the need for a stronger anti-doping policy in MMA and supported the adoption of regular drug testing by the UFC in 2015. Outside the octagon, the GSP Foundation distributes scholarship money to Quebec athletes and raises awareness about bullying. St-Pierre transcends his sport: he’s a celebrity with endorsements and a social media following not entirely connected to MMA.

In other ways, St-Pierre has carved a path quite different from the male professional athletes who came before him. In 2013, he took a four-year career hiatus. Initially, the break was to recover from an injury. But since then, GSP has acknowledged that he needed a mental-health break to work on his sleeping problems and stress. By admitting his challenges and the anxiety sport causes him, GSP has broken with traditional models of masculinity. He promotes a holistic approach to wellness that goes beyond physical strength. Following his four-year break, St-Pierre returned to the octagon to win the Middleweight UFC Championship.

The Canadian Museum of History is the first institution in the world to acquire an item from the career of Georges St-Pierre and a UFC title belt. MMA is a contemporary phenomenon, dating to just 1993, and among the fastest growing sports in Canada.

While this belt is only 10 years old, it connects to long-standing themes in Canada’s sports history. Like MMA, early professional hockey leagues were criticized for violence and brutality. Over the course of the 20th century, amateur and professional hockey organizations adopted rules to try to regulate the sport, which is now considered appropriate for family audiences. It is clear that Georges St-Pierre is a person who both embodies and shapes sporting culture, and who helps to define athleticism in the 21st century.