The year 2016 marks 100 years since women were given the right to vote in a provincial election. As obvious as it may be today to see women voting, the movement to secure votes for women was socially divisive. This important milestone in Canadian history is thus the theme of this year’s Canada History Week, held from July 1 to 7.

To commemorate the first voting rights for women in Canada, the Canadian Museum of History partnered with the Manitoba Museum on a display celebrating this significant anniversary. For this latest blog post, we invited Dr. Roland Sawatzky, Curator of History at the Manitoba Museum, to share some insights on the creation of the display.

“Nice women don’t want the vote” — these words were attributed to Manitoba Premier Sir Rodmond Roblin during a heated conversation with Nellie McClung in 1914, when the women’s suffrage movement was in full swing. Two years later, Manitoba became the first province to grant some women the right to vote.

“Votes for Women” pennant, felt, 1913–1915
Pennants and sashes were used to display loyalty to the cause. The use of gold in the North American women’s suffragist movement has its origins in the sunflower, a symbol of Kansas, where an early campaign was defeated in 1867.
Donated by Warren West, Manitoba Museum, H9-38-198

When the Manitoba Museum developed an exhibit to commemorate the 100th anniversary of these rights, we decided to use Roblin’s famous words as the title. It was a good choice: eyebrows were raised. We also wanted to do two other things with the exhibition: feature real artifacts from the period, and provide Canadians with a way to “rediscover” the story by looking at it in new ways.

The first problem with our project was that we didn’t have many artifacts from our own women’s suffrage movement. So we did what most museums do in a situation like this: we reached out to the public for help. As curator of the exhibition, I made a number of appearances on television and radio, and gave newspaper interviews. 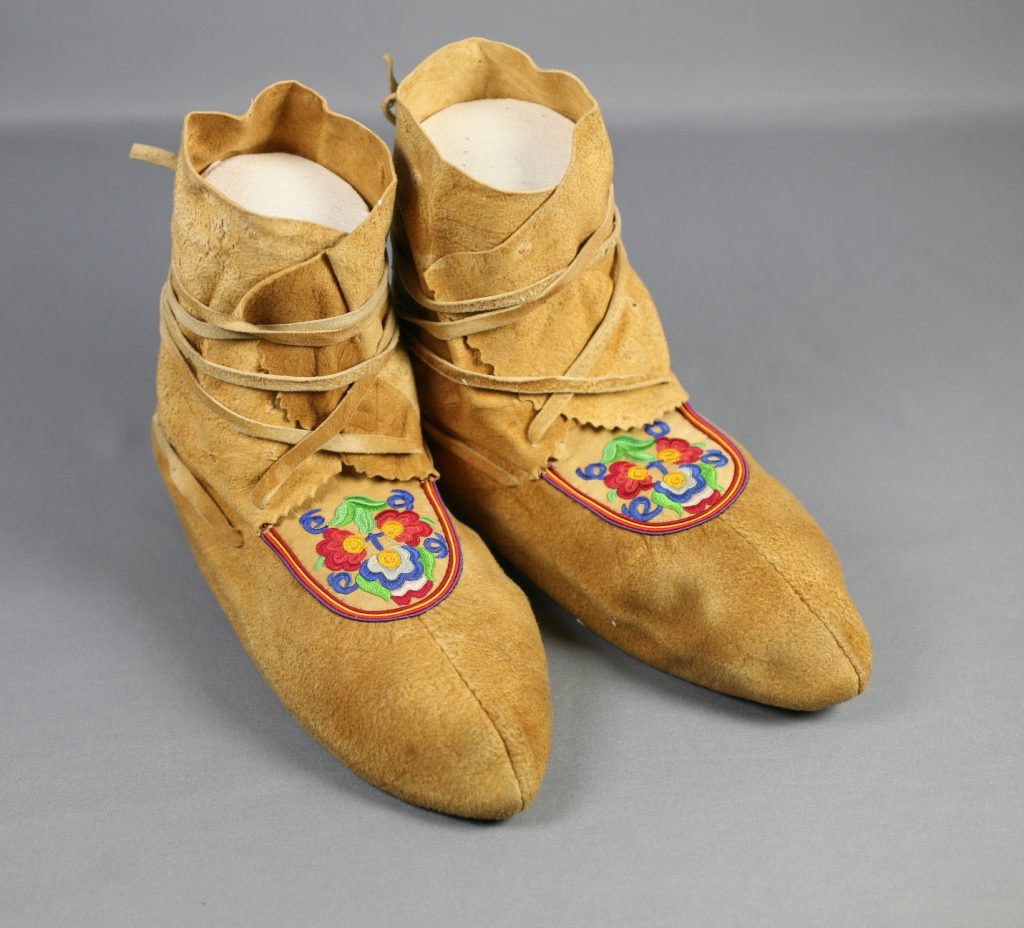 Woman’s moccasins, late 19th century, silk embroidery on caribou and moose hide, unidentified female Cree artisan, Norway House, Manitoba
While other Manitoban women won the vote in 1916, the maker of these beautiful shoes would have been denied the vote in federal elections for another 44 years.
Manitoba Museum, H4-0-779.

In the week following this media blitz, we received some interesting, unexpected and very welcome responses. The tweets and emails rolled in, with one common theme: Indigenous women didn’t get the vote in 1916. This is a topic we intended to include in the exhibition and teachers’ guides, but the issue didn’t come out in our early media conversations. 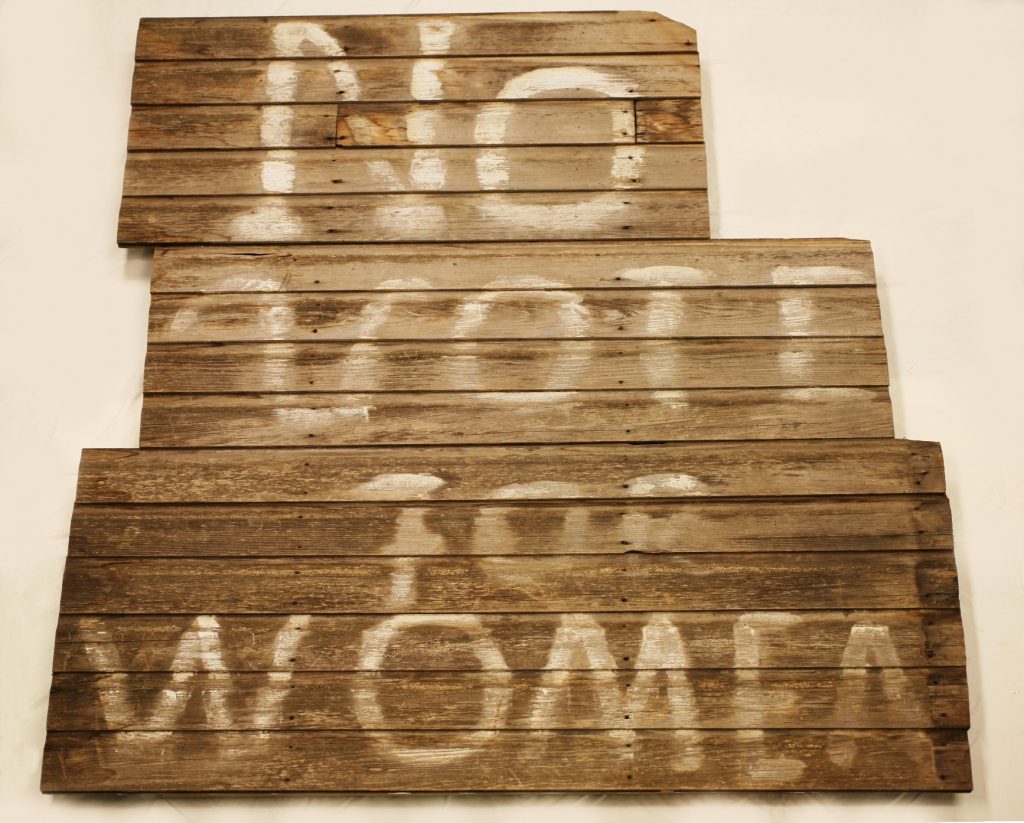 I was excited that people had been paying attention, and had brought up the topic so forcefully. I knew that from now on we would have to be explicit about the fact that women (and men) of Treaty status could not legally vote unless they gave up their Treaty rights. This only changed in 1952 in Manitoba, and in 1960 for federal elections. 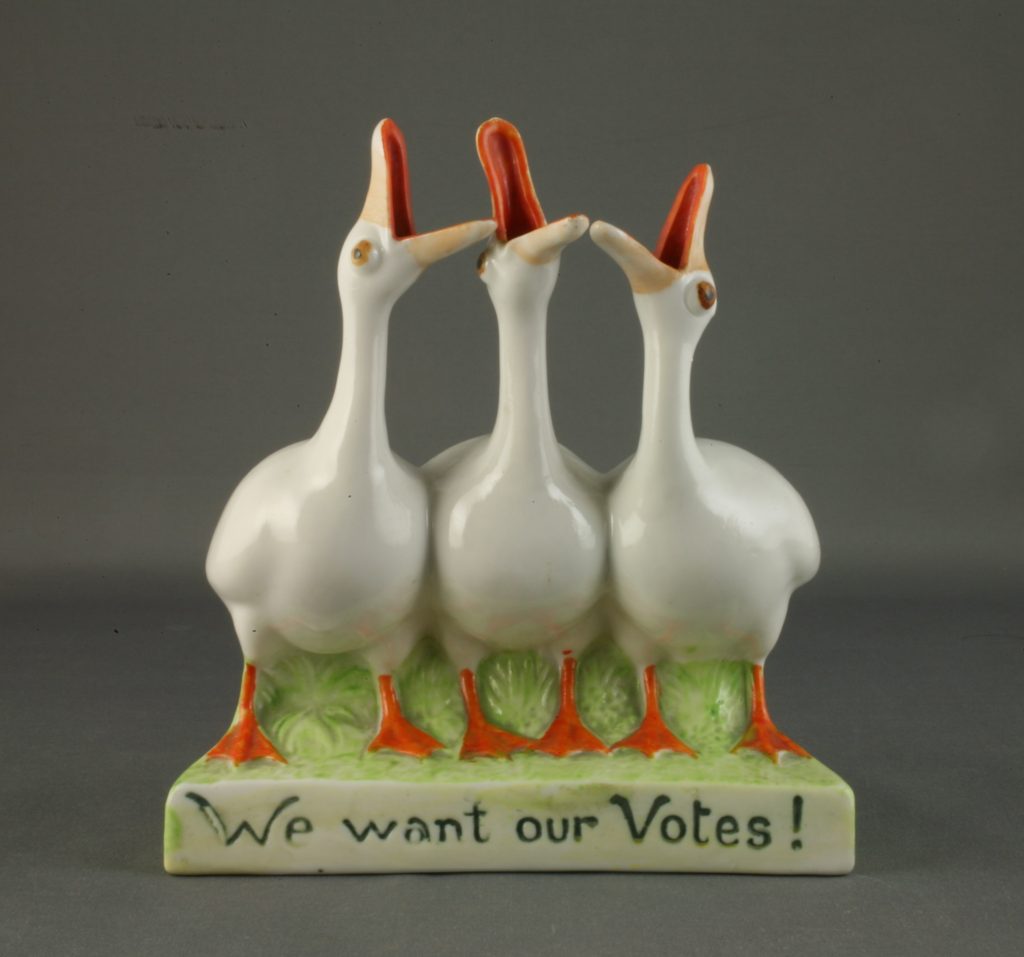 We also started to receive calls from people who had been cherishing women’s suffrage heirlooms and artifacts for decades, which they were ready to loan or donate for the exhibition. These ranged from objects as small as a watch fob to things as large as graffiti from an exterior house wall. Photographs of a women’s suffrage picnic near Roaring River, a “Votes for Women” pennant, and ceramic pieces were all gratefully accepted.

The collection reminds us that a huge grassroots movement helped push the women’s suffrage debate. For example, a replica of an 1894 petition for women’s voting rights includes over 5,000 signatures. While well-known leaders shaped the arguments, thousands of women and men from rural farms and urban factories gave the movement energy and purpose. 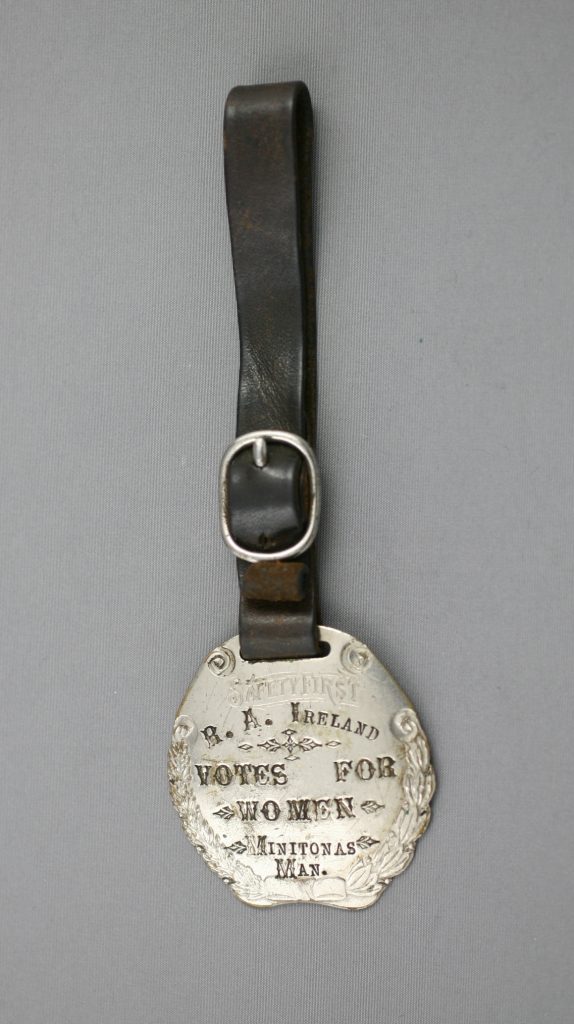 The collection and related exhibit also remind us that this debate was happening largely within white, English-speaking, Protestant, newcomer society, leaving out Indigenous voices, as well as many Eastern European immigrant communities. The attainment of universal voting rights for Canadians did not progress in a straight line.

Nice Women Don’t Want the Vote has completed its run at the Manitoba Museum, and is now travelling around the province. It will be presented at the Canadian Museum of History from October 5, 2016 to March 12, 2017.