As archaeologists, we are often asked about the best object we ever found. For me, what is most important is how we found it, under what circumstances, and with whom.

In 2013, I was excavating an Inuit semi-subterranean sod house on Qikirtajuaq (Smith Island) on the eastern north shore of Hudson Bay (Nunavik, Northern Quebec). The house has since been dated to a little more than 700 years old, corresponding to the first century of the Inuit migration in Eastern Arctic, between AD 1200 and 1300.

This was a project that my former colleagues of the Avataq Cultural Institute and I conducted for the community of Akulivik. I was sitting beside Tommy Weetaluktuk, now head of archaeology at the Avataq Cultural Institute, on one of our last excavation days. We were cleaning the stone-paved floor of the house, tired yet satisfied after a long summer of camping and excavation. A sort of bittersweet feeling was in the air … yes, our work was already over, but we would soon get back to our families and to the comfort of our homes.

The sweet silence of the tundra felt like a wonderful refreshing breeze, after we had both devoted several weeks to leading an archaeological field school for the brave students of Tukisiniarvik School. We were fully appreciative of, and were meditating in, that moment: it was neither too hot nor too cool and it brought welcome respite from the mosquitoes. In short, it felt perfect.

By accident, I came to notice the presence of objects stuck between the cracks of the paved floor, which had been built with flat stones. I told Tommy, “Hey, it would be worth taking time to clean the cracks of the floor.” Tommy’s reply came in the form of a short noise. Difficult to describe, this specific expression may exist only in the North. I understood it as an approbation, meaning “I agree with you, but let’s enjoy the silence.” Appreciating a few moments together in silence is probably one of the most beautiful things about true friendship in Inuit culture. 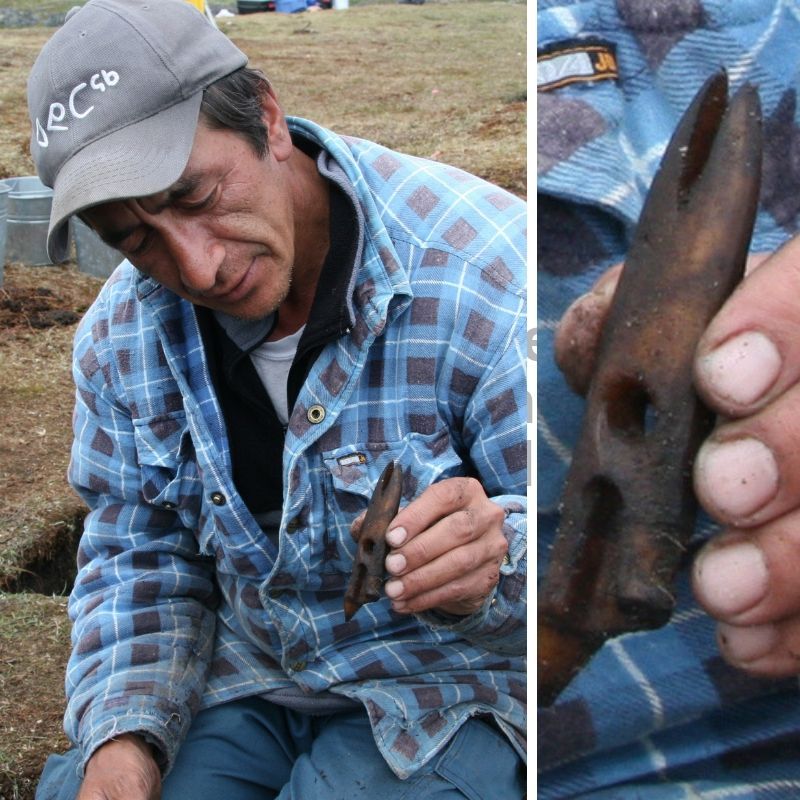 Five minutes after I had returned to my meditative state, I started hearing a frenetic scraping behind me, and sweeping noises followed by a long silence, which I soon came to understand was astonishment. “Thank you so much, Pierre!” I finally heard Tommy saying half-ironically, half-teasing me about my “brilliant comment” concerning the cracks of the floor. I turned and saw Tommy holding a splendid harpoon head he had found. He held it very gently and respectfully, as though he were holding a newborn baby. No one else could have known the importance of this discovery better than he did; he had just unearthed the best-preserved and oldest Thule-Inuit harpoon head ever found in Nunavik! We captured that magical moment in the picture above.

This harpoon head and many other amazing artifacts can now be seen at the Canadian Museum of History until November 3, as part of the exhibition Fragments of Humanity – Archaeology in Quebec.

Pierre Desrosiers is Curator, Central Archaeology, at the Canadian Museum of History.

One response to “An archaeology wonder moment”