A conversation with Dr. David Morrison 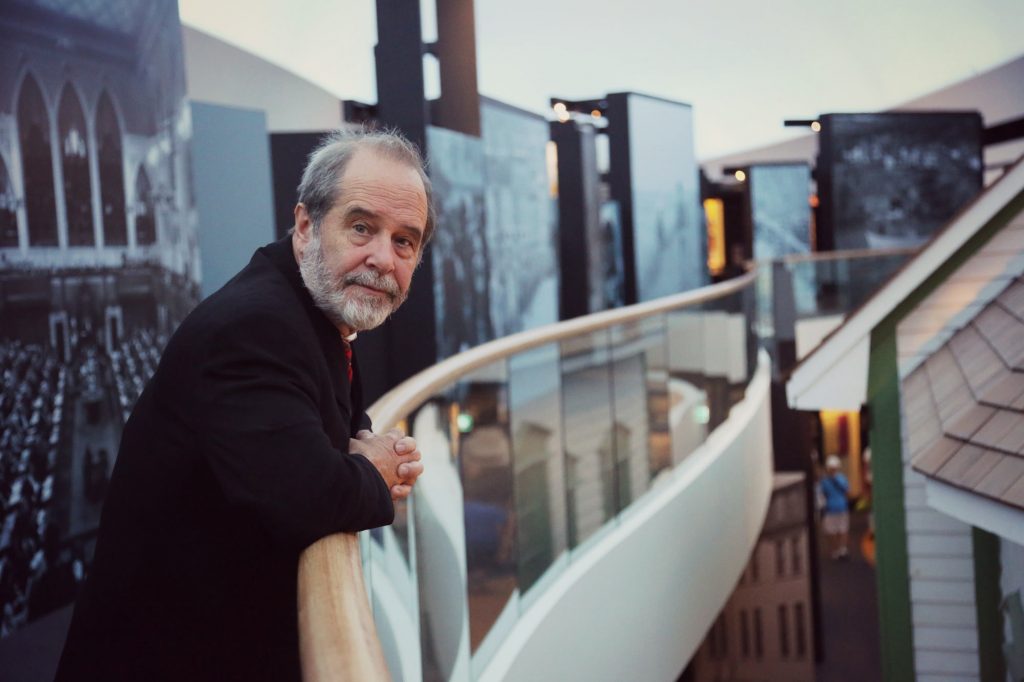 Dr. David Morrison looking at the Canadian History Hall from the mezzanine (Gallery 3). For the past five years, he has been the Hall’s Director of Research and Content. Photo: Canadian Museum of History.

A few years ago, Dr. David Morrison was thinking of retiring. He had been working at the Museum since the 1980s, and had contributed in countless ways during that long and productive career. But, in 2012, an exciting new project appeared on the horizon. The Museum was going to create a signature gallery that would tell Canada’s story from the dawn of human habitation to the present day. Of course, Dr. Morrison could not say no. He was named the Director of Research and Content for the Canadian History Hall.

Now, the Hall has been completed, and Dr. Morrison is going to retire — for certain this time. We sat down with him to speak about his many accomplishments at the Museum, including his most recent contributions to the Canadian History Hall, which opened on July 1.

You’ve spent the last five years as the Director of Research and Content for the largest and most comprehensive exhibition on Canadian history ever undertaken. Some might think you’re a historian. In fact, you’ve spent most of your career as an archaeologist. Can you tell us more about your background?

I always think of myself as having had three careers at the Museum. The first one was as an archaeologist. I spent 20 summers working in the Arctic for the Museum, starting in the early 1980s. Career number two at the Museum was in the late 1990s, when I became the Director of the Archaeology Division, which merged with [the Division of] History in 2002. Then, I was the Director of the Archaeology and History Division until 2012. The third stage in my career began in 2012, when the Hall appeared on the horizon, and I became the research director of that.

Actually, when you really look at it, because we’ve got the central hub and the ramp, the real exhibit space in the Hall is about 30,000, which seems awfully big. When we started, it seemed practically infinite, but it’s not.

We had a whole team working on what to say and how to say it. Galleries 1 and 2, which deal with everything up to 1914, were relatively straightforward. We decided to tell the story of Canada in specific sections, or what we call stories — for instance, the Path to Confederation, or New France — and it was easy enough to arrange these topics in overlapping chronology. But when we got to Gallery 3, on modern Canada (from 1914 to the present day), it became much more challenging. If we were doing this period 200 years from now, it would be easy; you could look back at it like looking down the lens of a telescope. But it is very difficult to break it up into stories when you’re close to it, like we are. It’s in living memory, and everyone has different opinions about it.

It seems that you reconciled these different opinions by telling Canada’s history using multiple perspectives. How did that come about?

When the Canadian History Hall’s predecessor, the Canada Hall, was created, many people believed that it was impossible to represent controversial issues in a museum setting without arousing too much criticism. Consequently, the Canada Hall used a streetscape, walk-through approach to Canadian history that focused on showing scenes from the Canadian past, rather than on specific events, especially contentious ones.

But in 2012, the Canadian War Museum put on its 1812 exhibition, and we were very impressed by its presentation of difficult events using multiple perspectives. That exhibition showed us the way.

The meaning you derive from these events, and even what is positive and what is negative, depends so much on who you are — your demographic, what your parents taught you, whether you’re English or French or Indigenous or Ukrainian or Chinese or Catholic or Protestant, and so on. It was very important to us from the beginning that we not privilege one perspective over another.

What makes you most proud of the Hall?

The really detailed, in-depth consultation we did with lndigenous people. It was far greater than what we did with the First Peoples Hall. There was far more engagement with Indigenous consultants and stakeholder groups, which shows in the Hall: Indigenous history is intertwined with the history of Canada rather than being segregated. I’m also proud of how we implemented multiple perspectives for complicated stories — and not just perspectives of Indigenous people in Canada and non-Indigenous Canadians; there are a lot of other voices here, too.

From your very long career at the Museum, what are you most proud of? (With the exception, of course, of the new Hall.)

I am proud of the fieldwork I did in the Arctic, and of the information that I was able to assemble from that. I am proud of having led the Archaeology and History Division for 10 years. I’m also very happy to have written some books that were popular, especially one on the history of the Inuvialuit, the Inuit who live in the Western Arctic. When I talk to people from there, they know the book and look upon it with some pride, and consequently so do I.

As you were considering retirement, you were offered the challenge of developing this large exhibition on Canadian history. What made you accept?

Well, I was thinking of retiring, but I didn’t really want to retire, so this project was very welcome. Also, I knew I would be working with people I respect: Jean-Marc Blais, the Director General of the Museum, and Mark O’Neill, the Museum’s President and CEO. It was Mark who had the idea for the Hall in the first place. I was also particularly glad to work with the other project directors, Chantal Amyot and Lisa Leblanc.

So, the team was a big draw, and the project itself was a huge opportunity to leave a legacy at the Museum. It’s very exciting that Canada is now at a place where we can produce a hall like this, and with very serious Indigenous buy-in. We’ve been able to present things like the building of the [Canadian Pacific] railroad not just as a great engineering feat that ties the country together, which is a story we’re all very familiar with, but also as an event with a high human cost. This Hall will have enormous power in shaping Canada’s perceptions of its past, and I believe we’ve put forth a much more comprehensive view of that past.

What will you miss most about this project when you retire?

The team we assembled to work on the Hall has been highly competent; they were good at things they had never even tried before. We had a dream team here. There was very little disharmony, and we received just the right amount of support from Jean-Marc Blais and Mark O’Neill. They trusted us to do this properly.